Joined Dec 21, 2012
·
1,442 Posts
Just curious if anyone has any experience with these. They aren't cheap, but a relative of mine had one hog hunting over easter and it was highly effective on the biggest pest/source of agriculture damage in Texas and I was curious about looking into one.

Anyway, was just curious if anyone had any experience with one of these as I never got the chance to shoot his, but I saw the quite effective results first hand.

My take on it after decades of owning '86's is stick to the 45/70. Full length, full mag '86 is a big heavy gun in any caliber including the .50s. . Carbines ar about right fro size and weight. The LWT short mag tube '86s even with a shot gun butt is a man killer with heavy loads. Nothing in North America that a hot 45/70 or 45/90 won't hammer down and shoot all the way through with one well placed shot and the right bullet.

My suggestion before jumping on a Turnbull .475 is shoot a few '86's (different models, long or short barrels, lwt pencil barrels, a thin carbine or heavy octagon barrels) and figure out what you really want. Likely better than having half dozen '86's sitting in the safe

A few of what I have or have had built. And no tang safety on any of them! Good luck in your search! 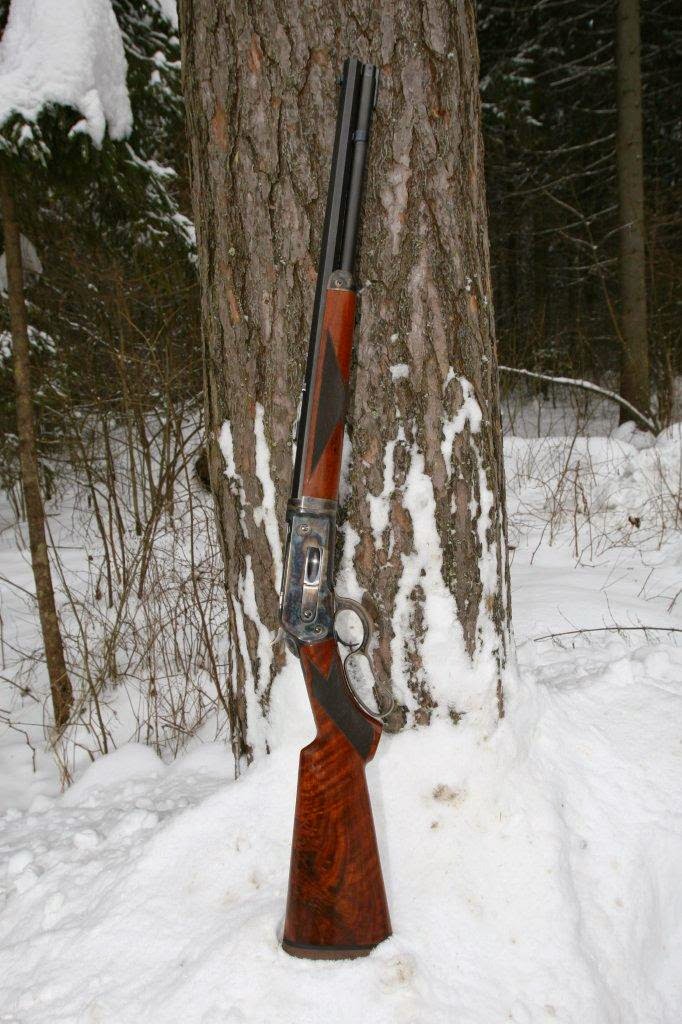 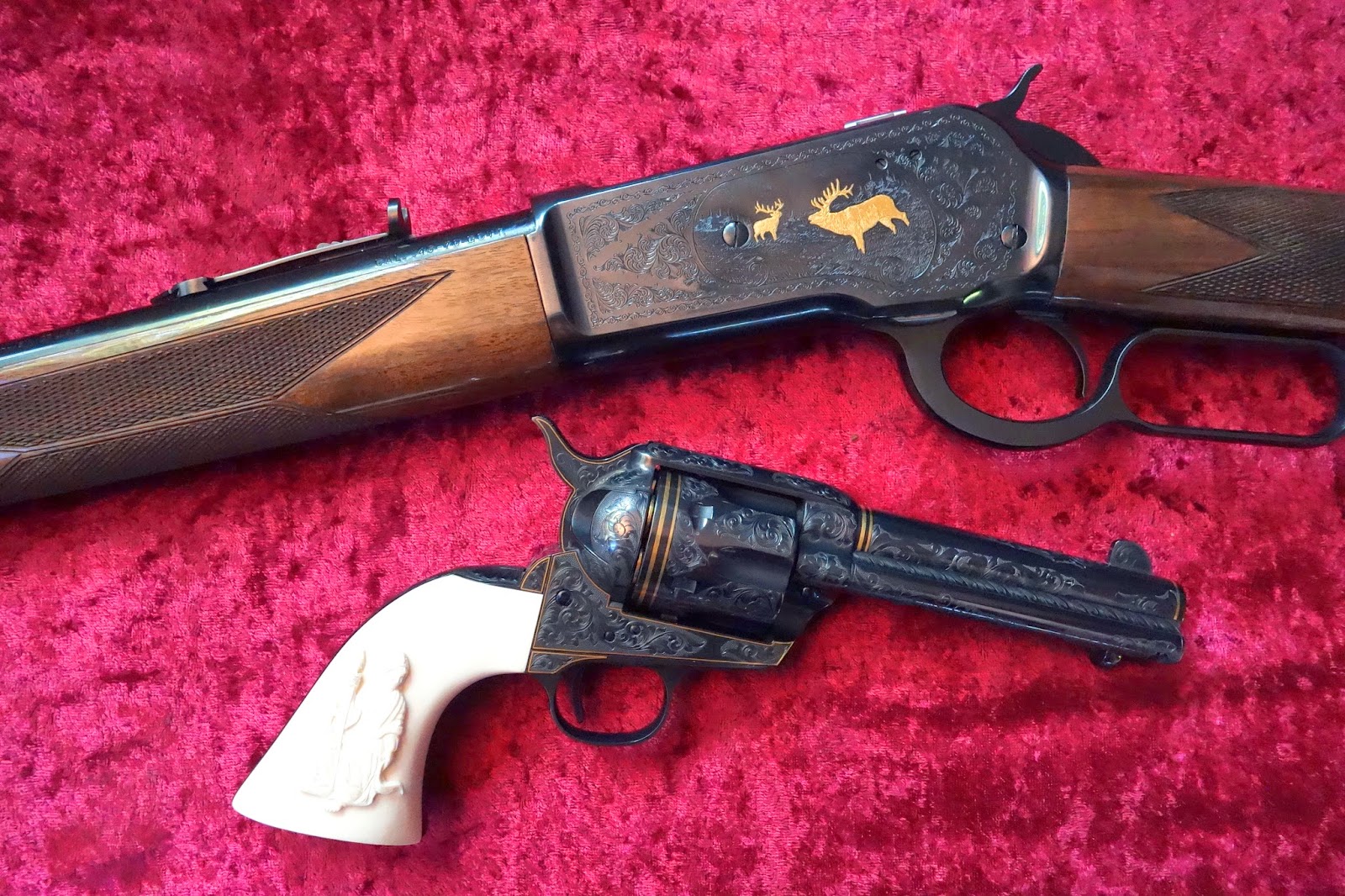 Joined Aug 12, 2013
·
1,544 Posts
As far as I know, the pricing on Turnbull "built to order" 1886's includes the base gun, a new production Winchester. The rebounding hammer is removed for a traditional half cock action and the tang safety is removed and welded up.

My only issue with it are the bullets available for the .475. You have a plethora of cast bullets but even the hardest, best heat treated cast bullets show their limitations when velocity creeps above 1300fps. At 2000fps, anything can happen. If I was going bigger than the .45-70, I would get a .50AK or .50-110.
► Show Full Signature
http://www.sixgunner.org


full octagon 26" barrel
full mag tube
smooth wood-may get checkered in future but budgets are what they are.
Non takedown
Iron sights
Straight stock
Shotgun pad
Mercury recoil reducer(I am still debting this as I have never had any experience with one to know if they are effective or not.
Upgrade 4x wood

Its a 9lb gun, which isn't lite, but I have hunted pheasant with a 10.5 lb parker before so it isn't that bad.

Price wasn't as bad as expected. They have lowered their prices from what they told me in the email.

Still debating. He did mention though that if I supplied my own action, the price became significantly cheaper. May have to see if that 1920 1886 action is still in my buddies project box....

Top one is a deluxe Winchester LWT. Safety was welded up, reblued and rechambered. Weight is 7.62#

Middle is a Browning '86 SRC. Only modes are a trigger job and rechambered to 45-90. Weight is 7.68# (one ounce more than the LWT version) And by far the best balanced gun of the bunch with or without ammo.

Obviously a full mag on a 26" rifle is gonna pack some weight by comparison to a half mag LWT.

To me this is the perfect '86.
► Show Full Signature
I’d rather be in the middle of nowhere than in any city on earth.

Joined Dec 21, 2012
·
1,442 Posts
I got into a conversation with an older gentleman who used to do predator control for TPWD here in Texas. He loves old winchesters and advised looking at getting a takedown rifle?

I am not familiar with the rifle version, I own several side x sides so I can see the advantage offered, but there seems to be a premium on takedowns?

Here are some lever gun loads for comparison.

I didn't have a 475 bullet so I made do. Interesting that less than a full wrap of masking tape kept the .45 bullet from going into the .475 case. Lots of premium 400 gr. .45 bullets available for a lever gun. 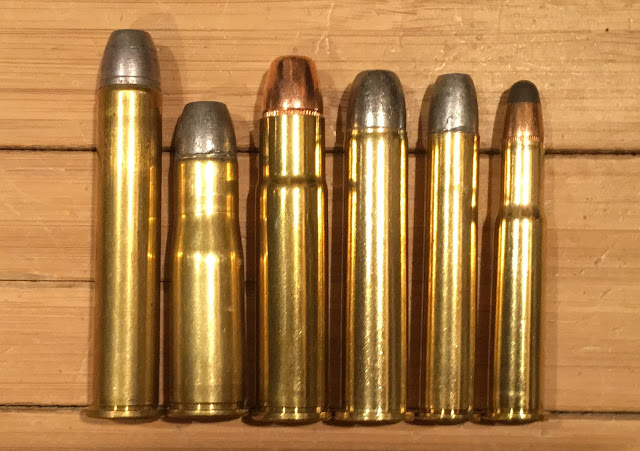 I don't have my 50-110, 50 Alaskan, or the hot 45-90 loads handy or I'd pass that along as well. Not a lot of difference between any of them on game given the same bullet designs and speed ( from all reports) until you hit the big 50s.

I will say this from experience. Bring your big boy pants and a good pad if you plan on shooting a lot of heavy, fast 400gr bullets. And a glove on your lever hand isn't a bad idea either. 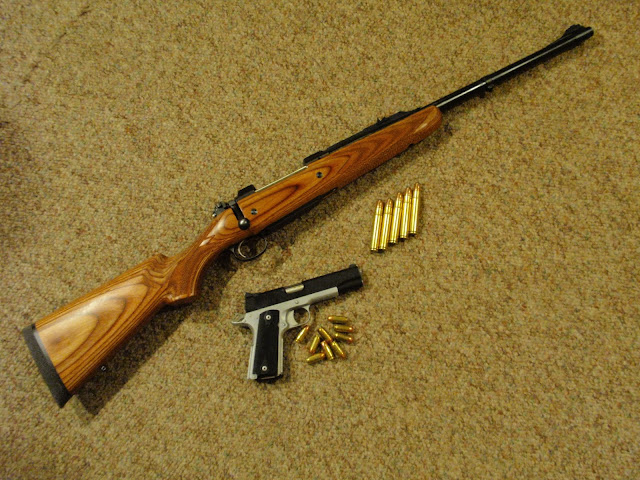 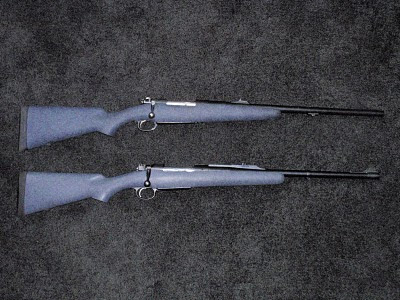 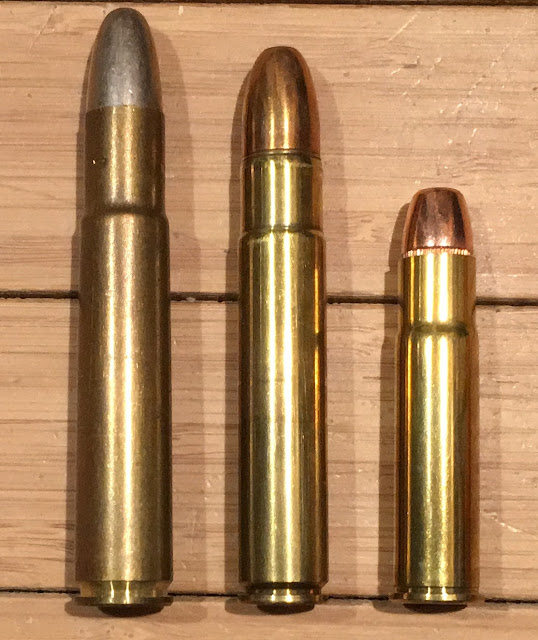 Kingcobb said:
I got into a conversation with an older gentleman who used to do predator control for TPWD here in Texas. He loves old winchesters and advised looking at getting a takedown rifle?

I am not familiar with the rifle version, I own several side x sides so I can see the advantage offered, but there seems to be a premium on takedowns?
Click to expand...

Interesting opinion. Be nice to discuss with him as to why he thought a TD model was of interest. My Grandfather was also a advocate of TD Winchester rifles and shotguns. I have both and don't see the advantage unless you were traveling back in the day where a TD would be easier to haul around.

Just spent a few minutes going through 5 pages of GB 1886 listings. Pretty impressive the different models of the 1886s Miroku has put out. I sure don't need another '86 but there are a lot of different Models of them available to choose from if you wanted to build the project dream gun. Which got me thinking and I was looking at the Browning 1886 as a basis for another project gun. Which dropped me down another rabbit hole and I found this one. Oh, my I need one of these!