A bit of historical perspective?

Status
Not open for further replies.


Many of us are enthralled with the history of these guns. And of the Colts that came before the SAA.

I was going to put this in the Lounge, but I think it is better fitting here as it directly relates to the history of the 1873 SAA.

When you think of the 1873 Colt, it actually came to the Western Frontier rather late. Lewis and Clark came through in 1804 to 1806. A hundred years prior in 1700, all the Plains Tribes had horses.

But for most of us TV Westerns or our overactive imaginations are what fuel our own chase for the perfect Colt SAA.

My imagination runs along with the rest. The photo above, is right there helping me along.

Much of what we envision of "the American Wild Indian" comes from the Great Plains, Northern Plains and Columbia Indian tribes. Colorfully dressed, expert horsemen and may be even rather comical in a fantasy way from my perspective till yesterday.

Native Americans were the ultimate subsistence farms/hunter/gathers. The winner of most every "survival episode". All of which meant for them, total warfare (as in kill anyone out of your own tribe if required), the buffalo and later for their own cultures, the horse, prior to the white man showing up.

I have ran buffalo on one of my horses. And I know what I'd want for a horse to run buffalo with if for real if I was hunting and shooting off horseback. I'd want a BIG one. I also know what kind of horse I'd want for everyday transportation. A much smaller horse. Kinda like your 4x4 and you Corvette. You'd want the right horse for the job. I'd want enough horse to be able to pick the "right horse".

Not uncommon for a Plateau family to have a 100 horse herd. Many families did.

Just like we'd all want a SAA, a good lever gun and long range Sharps if you were gonna be dropped back in time. A good horse was required

What I had not contemplated is just how frightening it would have been in 1850 or 1875 to actually meet an unhappy Native American willing to take your hair.

We spent much of yesterday at the Pendleton Roundup. Which is a yearly gathering of the NW Plateau tribes. The Columbia River Plateau (parts of Oregon/Washington/Idaho now) is where the first NA tribes started selective breading of horses, which in turn gave us Cayuse and Appaloosa horses.

If what we saw yesterday was any indication of what generations of native peoples looked like and were capable of, anyone heading out on the Oregon trial in 1850 had to have an ego the size of Texas or was just totally clueless of what was to come.

I'm not typically impressed by much. I was impressed. And frankly, taken aback, at just how intimidating these men and women were or could be. Put them on a horse? Sweet mother, thank your lucky stars you weren't born when they ruled the plains and whites had to ask permission.

Joined Mar 15, 2018
·
281 Posts
Necessity is the mother of invention. There is a reason the pioneers adopted the convoy system. Weren't there hundreds of wagons in wagon trains?

Human nature never changes. We see people today who are wise and prepare vs. people who are foolhardy and throw caution to the wind. I am sure the westward expansion had all types from extremely fearful of Indians to "C'mon, nothings gonna happen".

Meanwhile, those Colt six guns weren't safe queens back in the day. They were your Mutual of Omaha insurance policy.

Wagon trains were more typically a few wagons seldom even dozens. The grazing for the work animals and game that help support the human's diet along the trail wouldn't support the numbers.

It took the Army to make the wagon trails safe. And the troop numbers available after the Civil War.

Joined Jul 30, 2018
·
2,197 Posts
I started reading Women's Diaries Of The Westward Journey. They didn't seem to have much of a clue about what was ahead. The Indians were a danger but sickness and accidents were the greatest threat. Children falling under wagons and being crushed or made lame, weeks of rain causing sickness, or more accidents. Wagons tipping over and killing or injuring the riders. There is nothing cheerful in the book. It was depressing to read at times. From what I have read, the men thought the west would be a land of milk and honey and the wives dutifully went along. One story was about a family. The wagon tipped over with the pregnant mother. It started raining for days so the injured pregnant mother suffered terribly. A stampede occurred and the father was mortally wounded trying to stop it. He died. She had the baby and died. A woman who had just lost a baby grabbed it for her own. The rest of the kids were split up into other families.

Joined Jan 4, 2014
·
11,587 Posts
Sounds about right. It wasn't a gun that killed most on either side of that conflict but weather, accidents and disease. I read in one of my books on the Oregon trail most of the deaths were from wagon accidents. They rolled three of the originals through, while we watched yesterday, actual wagons that came over the OT in 1858. Airstreams they were not

Locally? There was the Ward massacre in 1854. We were easily "out gunned" in those days by a bow and arrow. "Shoshone killed 18 of the 20 members of the Alexander Ward party, attacking them on the Oregon Trail in western Idaho. This event led the U.S. eventually to abandon Fort Boise and Fort Hall, in favor of the use of military escorts for emigrant wagon trains."

Joined Mar 7, 2009
·
3,520 Posts
Probably no one noticed but in the portrait @ the 1st of this posting the rider is holding his gun in the "throwdown" position that Agarbers recently wrote an article about a few months ago in Guns Magazine.

Jim Martin said:
Probably no one noticed but in the portrait @ the 1st of this posting the rider is holding his gun in the "throwdown" position that Agarbers recently wrote an article about a few months ago in Guns Magazine.
Click to expand...

Heck Jim, I thought that was you on the horse!

Joined Mar 7, 2009
·
3,520 Posts
I have shot live quite a bit from the horse over the yrs.-I remember an old story about a guy asking a cowboy if he could shoot off his horse,& the cowboy said "yeah once" 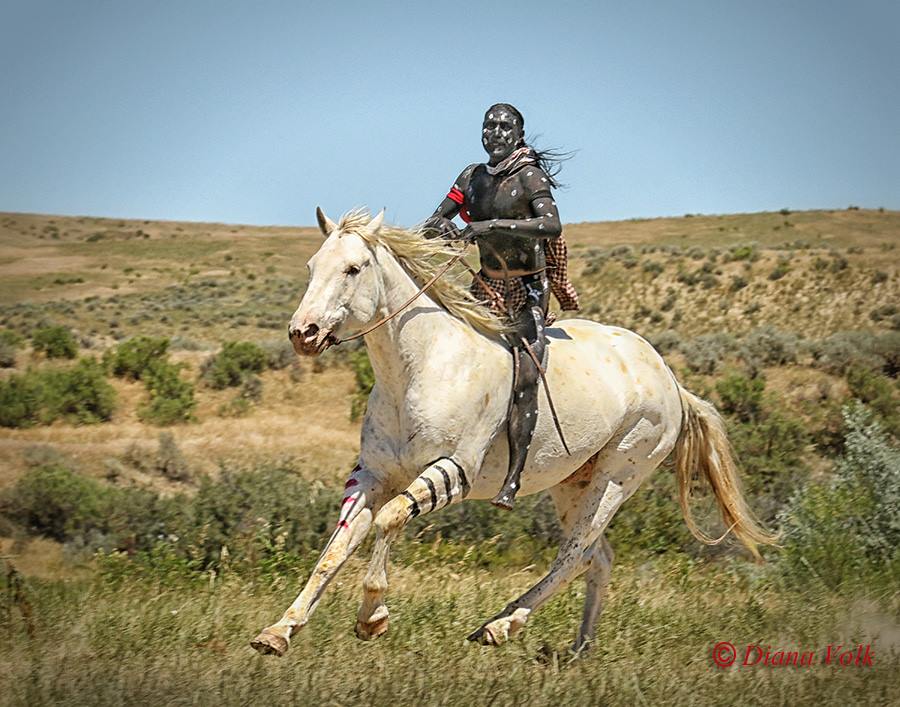 Joined Aug 8, 2015
·
4,246 Posts
The old west was brutal all sides of it. You had to be tough even in the 'civilized" areas- the odds were not good you would make it to your three score and ten. A infected tooth not pulled fast enough could kill you dead as hell.


"Some of the most savage war in world history was waged on the American Plains from 1865 to 1879. As settlers moved west following the Civil War, they found powerful Indian tribes barring the way. When the U.S. Army intervened, a bloody and prolonged conflict ensued.Drawing heavily from diaries, letters, and memoirs from American Plains settlers, historian Thomas Goodrich weaves a spellbinding tale of life and death on the prairie, told in the timeless words of the participants themselves. Scalp Dance is a powerful, unforgettable epic that shatters modern myths. Within its pages, the reader will find a truthful account of Indian warfare as it occurred."

I like history esp. old west history direct from the people who lived it. "Scalp Dance" is a interesting read about Plains Indian Warfare


"Lakota Noon" tells another side of the story
C

Joined Jul 29, 2021
·
453 Posts
I recently finish reading "Empire of The Summer Moon". It's a terrific read for anyone who needs to have their romantic image of pioneer life destroyed. And it provides meaning to Thomas Hobbes' quote about "continual fear, and danger of violent death: and the life of man, solitary, poor, nasty, brutish and short." Makes one appreciate the luxury of being able to watch TV and drink a beer in peace.
As most of these Western history books do, "Empire of The Summer Moon" touches on the devastating effects of the development of the revolver and the unlikely rescue of Samuel Colt by a bunch to Texans.
R

Joined Jul 11, 2020
·
172 Posts
Nice thread. Interesting how quickly the western tribes adopted the horse, which were brought to the New World by the Spanish. First horses traveled with Columbus on his second voyage to Hispaniola arriving La Isabela in late December 1493. Mainland horses arrived with Spaniards in 1530s. Bison hunting must have been vastly improved with introduced wild mustangs growing into herds in the west.
I have recovered some of the first horseshoes in the Americas on a 1550s shipwreck, which will be conserved for museum interpretation and exhibit. Holding one while underwater makes me ponder the history of the west and significance of such a simple artifact as evidence of the what was to become our united history. Both good and bad.
W

Joined Dec 10, 2008
·
10,195 Posts
There’s a new Martin Scorsese movie coming out next year based on the rivetting but sad non fiction book Killer Of The Flower Moon. It’s about the 1920s Osage Indian murders and “the birth of the FBI”. A book about a horrible incident in Oklahoma. it’s sad and depressing to read. Robert DiNiro is in it and lately I can’t stand the guy so the film will probably be designed to link the bad guys in it symbolically to Trump somehow. I’ll try watching it when it’s on for free.

Joined Feb 21, 2006
·
7,499 Posts
One of the first books on Indians I read when I moved out west was "Captured by The Indians: 15 Firsthand Accounts 1750-1870". A lot of them focus on the early Colonial days. A lot of Americans need to remember that it wasn't just post-Civil War when settlers began encountering Indian attacks and kidnappings. Back in 1870, people knew the history of over 2 centuries of Indian danger, but by 1970 a lot had been forgotten. From the French & Indian War on into the early American independence, frontier cabins and sometimes entire villages were attacked, and many whites killed. In some attacks entire settler villages were wiped out, 100s of whites, and a few children and women taken prisoner, the men all killed. In 1680 the Indians in New Mexico revolted against the Spanish, destroying settlements and driving whites out of the area for 10 years. The Indians killed 250 and kidnapped 100 captives in the 1813 Fort Mims massacre. There were reasons of course, but the point is by the Plains wars Americans had 200 years of familiarity with how brutal a lot of tribes could be.

Joined Jul 30, 2018
·
2,197 Posts
Some historians feel the Pueblo Revolt of 1680 allowed a huge influx of horses into the hands of the plains tribes. The revolt killed or ran the Spanish out of the New Mexico and Arizona region which liberated the massive horse herds. Some disagree about the real impact, but it was still a huge influx of horses.

Pueblo Revolt of 1680 allowed a huge influx of horses into the hands of the plains tribes.
Click to expand...

Pueblo Revolt is pretty much a given as to when and where the Native American's got the horse. The Pueblos had little use for the horse so they traded them off in large numbers after the 1680 revolt to the Plain's tribes. The Spanish had left behind 1000s. By 1805 the Nez Piece and Cayuse had 10s of thousands.

There are other theories. But the Pueblo Revolt was the biggest influx of horses into NA. How the horse got to those numbers in 125 years is still pretty amazing.

The Comanches were a significant influence on settlement of the South West.

Good reads.
Hämäläinen’s The Comanche Empire and Gwynn’s Empire of the Summer Moon.


What nightmares used to look like. Save the last bullets for yourself and the family.
1 - 20 of 57 Posts

Status
Not open for further replies.