A Story and a Discovery

Joined Nov 18, 2019
·
931 Posts
A couple of years ago I bought my very first gun from an LGS, which happened to be a 1968 Detective Special. I really like the old style Detectives and decided that's what I wanted. They had one in stock locally, so I bought it. My knowledge about Colts at the time was definitely incredibly limited, and the gun was pretty worn. Shooter grade at best. But nonetheless, I was a happy camper.

After some time, I found some odd drill holes in the frame of the gun, which was concerning. Through old photos, I confirmed they were there when I bought it, and apparently, I'm just really oblivious. Research told me these were for a hammer shroud, but there obviously was no hammer shroud on it when I bought it. Definitely interesting to say the least. I didn't mind them being there but would occasionally sift eBay for any shrouds for sale to fit my little guy.

Well, as my obsession with and knowledge of Colts grew, I developed a taste for pre-war Detective Specials. They're definitely my favorite model, and although I don't like second issues as much, I decided to hold onto my '68 beater because it's my first gun, and once you give that up, you can't get it back.

With that it mind, I figured, hey, why not get a letter for it? I'm planning to keep it, and it'd be neat to know a little about its past. Most letters aren't that exciting, but I bought it locally, so maybe it shipped to somewhere around here. Also, I'd get to learn if the drilled shroud holes were done post-factory or not.
-----------------
Well, my letter finally came. And I'm absolutely blown away. Holy Moly.

My little Detective was shipped to the Philadelphia Police Department! AND with the hammer shroud as a factory modification! Wow. For what I had very little expectations for, I won the archive lottery.

Knowing that, it also makes sense why it's so worn and missing the shroud. It likely spent its life being frequently carried as a service weapon. Also, those hammer shrouds aren't incredibly strong, so I wouldn't be surprised if it broke after decades of constant use.

It has absolutely no police markings, so I would never have guessed.

What a cool discovery.

Joined Nov 18, 2019
·
931 Posts
Does anyone else have any P.P.D. Detective Specials? Or any other revolvers issued to them? I'd love to learn more about mine if anyone has any information to share!

According to the letter, there are 41 siblings out there that also all have hammer shrouds, but after searching around on the internet, I wasn't able to find any from old listings or photos.

SnidelyWhiplash said:
Great discovery! Now you should start looking for a hammer shroud to install on it.
Click to expand...

Thank you, Snidely! And that's the plan! I've already been casually looking for one since I found out that's what the drill holes were for, but I haven't had much luck finding the right one. I've learned that hammer shrouds come with two different screw sizes, and mine needs the larger of the two.

But now that I know mine left the factory with a shroud, I'm definitely going to step up my search! It's only proper to restore it to its former glory.

Joined Aug 23, 2015
·
10,841 Posts
There are two different hammer shrouds out there...one is Colt supplied and one not and is unmarked. The genuine Colt shroud has the Rampant Colt on it. For all I know the unmarked versions may have come from the same vendor but sold independently as aftermarket.

Joined 11 mo ago
·
1,179 Posts
Very cool gun, with a great letter. I grew up right on the other side of the bridge on the Jersey side and was in Philly a lot.

SnidelyWhiplash said:
There are two different hammer shrouds out there...one is Colt supplied and one not and is unmarked. The genuine Colt shroud has the Rampant Colt on it. For all I know the unmarked versions may have come from the same vendor but sold independently as aftermarket.
Click to expand...

Thanks for the info! I don't know where all of the unmarked versions came from, but I do know there were a couple of private manufacturers. Waller & Sons made some until they closed their business some years ago. Which, I have been trying to look for ones with the Rampant Colt mark, as I'd rather have a factory shroud and figured the stamp was a good way to tell.

With that being said, my comment above about the two different screw sizes refers specifically to the factory Rampant Colt marked shrouds. What I've noticed is I believe there are two 'generations' of hammer shrouds, with each having a unique Rampant Colt stamp and screw size.

Below is a photo of a hammer shroud I recently owned. The screw size was too small for the frame on my gun.

And below is an image of another 1968 DS with a hammer shroud, which I believe is the one I need. Notice how the Rampant Colt looks different. Both are from the factory. At some point, Colt must have decided to update the design.

Joined Sep 6, 2004
·
2,280 Posts
Very cool and I hope you can find the correct shroud to restore it to its "as issued" configuration.
Letters are always a gamble and you lucked out. I lettered my 1939 Dick Special hoping for an interesting destination and it was just another gun that shipped to Belknap Hardware in Louisville, KY.

Joined Oct 6, 2006
·
6,111 Posts
You can get fill plug screws to fill the holes. I had one colt DS with a hammer shroud but it took longer for me to acquire the sight picture, others may not have that issue. FWIW, on a 1966-71 detective special, if you put the diamondback 2 1/2” service square butt stocks on it, it almost looks like an early 30’s square butt DS. And the square butt stocks really help with recoil and allow more grip if your hand is large. But, they don’t conceal as well.

You now have a real keeper.

I think this is what you are looking for: 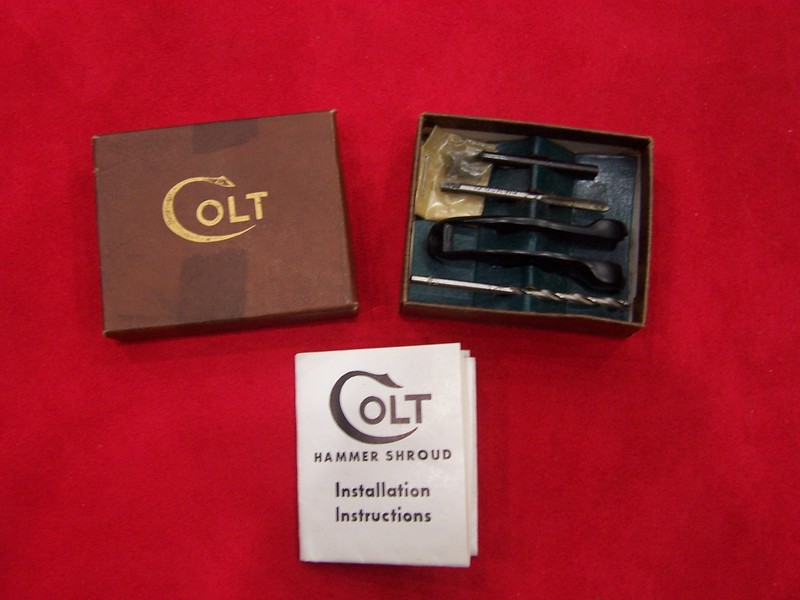 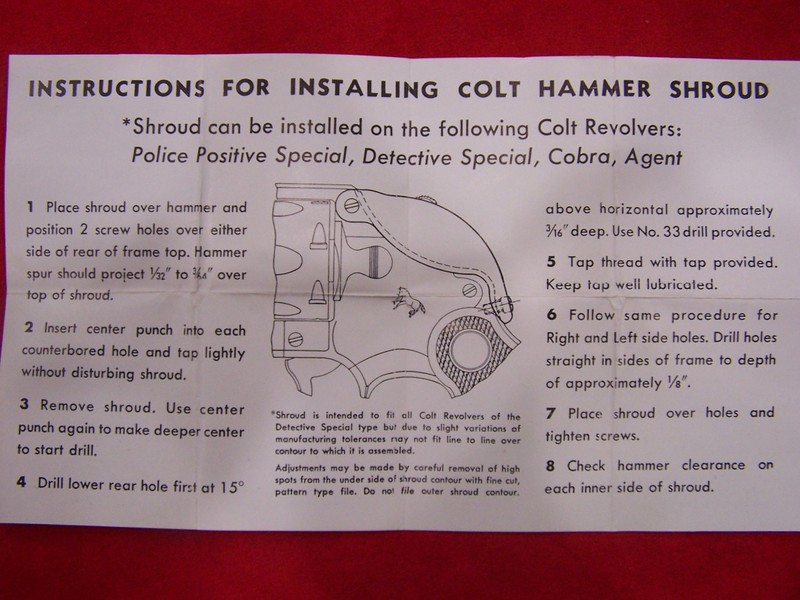 thecoltguy said:
Great story Keith and that is why I always try to get a letter on every gun that I can.

You now have a real keeper.

I think this is what you are looking for:

Thanks, Cam! I definitely have new appreciation for my little revolver. Certainly a testament to why archive letters are worth getting. You never know what you may find.

And you would be correct. That is exactly what I'm looking for. Out of curiosity, what style is the Rampant Colt stamp? From an earlier post in this thread, I mention how I believe there are two styles of factory hammer shrouds, each with a different stamp style and screw size, respectively. I'd be curious to know which your kit has.

If you ever do want to let go of it, let me know. It sounds like I already have the shipping covered (compliments of ColtsDad). In all seriousness though, I'd hate to separate the shroud from its box in a mint example like that. Those kits are hard to find.

Unfortunately, I sold it a few years ago. If it was still in my possession it would be on the way to you. I don't remember what size Rampant Colt was on it. Honestly, I did not know that there were two different sizes. I am not up to speed on the Post War Colts as I have always concentrated on the pre-war

Unfortunately, I sold it a few years ago. If it was still in my possession it would be on the way to you. I don't remember what size Rampant Colt was on it. Honestly, I did not know that there were two different sizes. I am not up to speed on the Post War Colts as I have always concentrated on the pre-war

Cam, I appreciate that you'd send it my way if you still had it. The thought is what counts.

Also, I do know you're a pre-war enthusiast, so I won't hold it against you for not knowing that there were different sizes on these post war hammer shrouds.

Honestly, I didn't know either until I bought a hammer shroud and purchased 3 side plate screws from Numrich to go with it. Upon arrival, I discover the holes in the shroud were too small for the drill holes in my Detective. On top of that, the three screws I received were inconsistent with each other. Two were 'thin' and fit in the shroud, and one was 'thick' and screwed into the frame of my gun. That is when I came to the conclusion that there were two sizes, and Colt changed it at some point. Perhaps when they introduced the third issue with the barrel shroud they also changed the hammer shrouds?

For your knowledge and future reference, here are a couple of photos from @trains2planes that are great for visualizing the new and old shroud designs.

This is the newer style hammer shroud with corresponding 'thin' screw. This is like the one I owned. I believe it is the more common shroud.

And this is the older style hammer shroud with corresponding 'thick' screw. This is the style I believe I need.

Joined Feb 21, 2007
·
7,179 Posts
Thanks Keith, very nice illustration to show the difference. Now I wish I had taken a picture with the screws out of the bag. I really don't know which one it was. Hopefully, it worked for the buyer.

Very cool gun, with a great letter. I grew up right on the other side of the bridge on the Jersey side and was in Philly a lot.
Click to expand...

I grew up going to the Spectrum, JFK, & The Vet. Grew up on the NJ side too.

Great discovery on the revolver. I have always liked police guns. I have a few, shotguns, rifle and pistols. I have a Glock 21 that is marked Pennsylvania State Police. I only bought it because of that. I test fired it and it instantly became a safe queen.
1 - 20 of 21 Posts
Join the discussion
Continue with Facebook
Continue with Google
or sign up with email
About this Discussion
20 Replies
11 Participants
Last post:
vinn 10 d ago
Colt Forum
A forum community dedicated to Colt firearm owners and enthusiasts. Come join the discussion about performance, gunsmithing, troubleshooting, reviews, accessories, classifieds, and more!
Full Forum Listing
Explore Our Forums
Colt Revolvers The Lounge Colt Semiauto Pistols Single Action Army Python
Recommended Communities