Joined Apr 19, 2015
·
217 Posts
I bought a few grips from a friend and one of the sets is for a gen1 Woodsman. It's heavily checkered with somewhat wild looking large thumb rest.

These fill my hands completely and fit me better than anything I've picked up before. 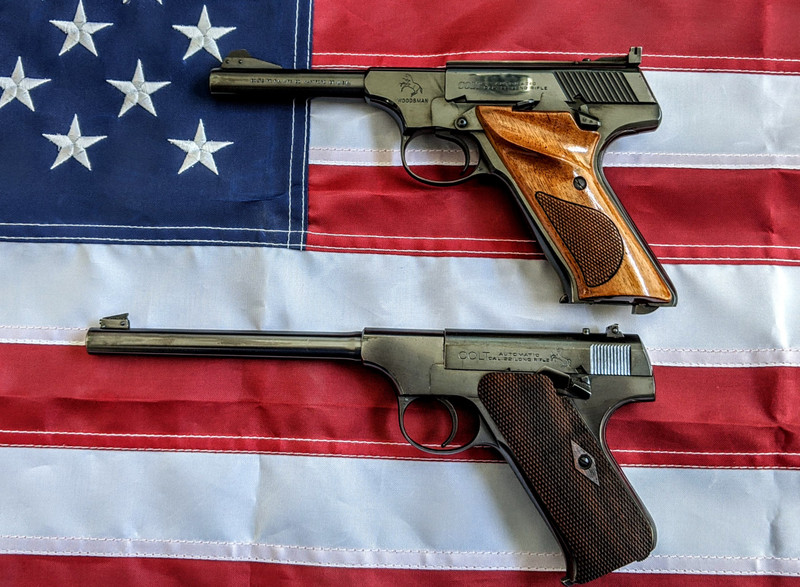 Joined Oct 23, 2009
·
2,922 Posts
This MT Bullseye was shipped to Joseph Lorch, Colt's Wash DC representative 2/9/1940 in a shipment of two (conjecture that these two were samples or even gifts on loan acct per Bill Jenkins book "US Military & Marksmanship Automatic Pistols" pgs. 93-101 and specifically noted on pg 99 & pictured on pg 101)
U S Coast Guard and NASA marked.

Here's my prewar/postwar somewhat near the end of the first series target model sn 186718. Not nearly as nice as
yours. Notice the label on the matching box w the listing of plastic elongated stocks.

Joined Dec 28, 2012
·
3 Posts
Yes, the stocks are what was on it and I got it from the family of the original owner.
The sn is just a few hundred lower than yours. Neat variation.

I love the listing of the elongated stocks on your box. Never ran across that before. You have a great Woodsman and box!
W

Joined Sep 6, 2004
·
2,121 Posts
I also have one of the pre-war/post war Woodsmans. The serial number is right in the middle of the 180,000 range and it shipped on 11/14/46. When I purchased it, it was fitted with a horrid set of black Franzite stocks. Not knowing that the correct stocks were the elongated plastic stocks leftover from the military contract Match Targets, I found a set of first series checkered walnut stocks on ebay. Interestingly, and sadly the seller who was from Great Britain told me that he was no longer allowed to own his Woodsman and was parting it out rather than turning it in for destruction.

I later found a set of the correct plastic stocks and have those too. I think the pre-war/post war guns are an interesting variation. Just a few thousand were assembled with leftover parts from October of 1946 to June of 1947 as Colt's wanted to clean up their inventory prior to introducing the 2nd Series Woodsmans.

Here's another very late Series One, SN1869xx, dating out at 1947. Previous modifications include Parkerizing, different grips and replacement front and rear sights. The rear sight is a Micro, which is actually quite nicer than factory.

I got this in 1985 just after seeing a wonderful display of Colt Woodsmans by Bob Rayburn at the NRA Convention in Seattle. After seeing those, I knew I had to have one. This was the first one that showed up. I didn't have the money for it, but I traded a well worn HS HD Military for it. This piece has been a frequent companion in the field ever since.

There have been many Woodsmans since then, but this will always be "that one".
B

Joined 1 mo ago
·
34 Posts
Can anyone tell me what the roll mark number on the right side of the trigger guard means on Woodsmans? Is it the number of gun from a lot or something?

kwill said:
It's not really a roll mark. It is an assembler's mark made with a hand stamp. It should be on top of the finish.
Click to expand...

If you shoot both of the above Woodsmen, what are your grouping with each? As I’ve aged, I find the target sights make a big difference. Used to be able to hit a squirrel in the head, now it just looks at me and walks away.

I use both "imagBB" and "Postimimage". Both are free for a standard membership but do offer upgrades. Easy to post from them. The free one is the one I use for both.
381 - 398 of 398 Posts
Join the discussion
Continue with Facebook
Continue with Google
or sign up with email
About this Discussion
397 Replies
128 Participants
Last post:
Hanshi 2 d ago
Colt Forum
A forum community dedicated to Colt firearm owners and enthusiasts. Come join the discussion about performance, gunsmithing, troubleshooting, reviews, accessories, classifieds, and more!
Full Forum Listing
Explore Our Forums
Colt Revolvers The Lounge Colt Semiauto Pistols Single Action Army Python
Recommended Communities