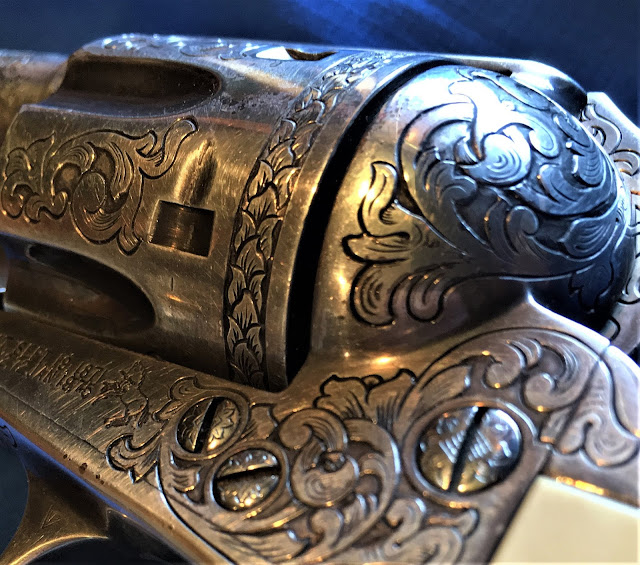 Cozmo said:
For those that admire fine engraving and haven't seen this gun it is worth a look at the enlarged photos I think. Discounting poorly polished gun the engraving was done on, I really like the engraving pattern and the majority of the gold inlay work on this blue and case gun.

Take a look at the detailed photos on GI for a better reference. We've already talked about the gun. For those that know somethin of high-level engraving, let's talk about the engraving. Not to everyone's taste but I really like the depth of the relief cuts and shading because of it. The engraver made a minimal amount of coverage go a long way. The more I look at the engraving the more I like it. I'd also guess it is Persinger's ivory.

I also really like this engraving, the depth and background are extremely well done IMHO!

Joined Jan 19, 2021
·
230 Posts
Well, might as well jump in w/ some of my engraved weapons. (1) This is a S&W 2nd model American (2) this is a 1st-year production Co
lt SAA which I normally would totally oppose touching any antique weapon but this poor thing had been abused to the point, I didn't know what to do w/ it so talked to our pastor's brother who engraved guns & said he could fix it for me. It had the original 7.5" barrel replaced w/ a 5.5" barrel but I kept it as is, & had it engraved & nickeled, had a friend back in MO, make me a one-piece burled walnut grips & I sent him a piece of Ivory to carve me an Eagle perched on a 2 peso on one leg & the other holding a rattlesnake (3) a S&W model 19 .357 cal. & had it engraved as a tribute to the one I carried for 23 years but the Govt required I turn it in and it was to be destroyed It may only hold 6 rounds but it never failed me all those years (6) 1860 army Colt w/ what sure looks like factory engraving & was a civilian model in a shipment of 500 U.S. government inspected 60 Army Colts and that too is a mystery as civilian weapons were not produced at that time in 1862 (4) a S&W model 60 .357 engraved
(5)an honest 60 Army Colt Richards/Mason conversion w/ a beautiful ivory w/ relief carving & was engraved but was carried for a long time w/ the engraving worn down. It must have been beautiful when done

Joined May 26, 2020
·
226 Posts
Interesting, I just ran across this COZMO article, as I was also looking at the well done engraving on the COLT in GI .
And was interested in buying it. But notice the finish and the gap between the frame and stock. And not sure of the sight as it looks modified . One could fill in the gap due to shrinking of the ivory and fit German silver sheet 90 degrees between the top and side areas of the grip frame and do it for both sides to make it look more uniform , and polish the edges.

Joined Jul 28, 2013
·
21,395 Posts
If you like engraving with 3-D character, this is one Ken Hurst did for me where he not only 'cut away' some of the scroll background, but he also added some silver overlays and engraved scrolls on them.