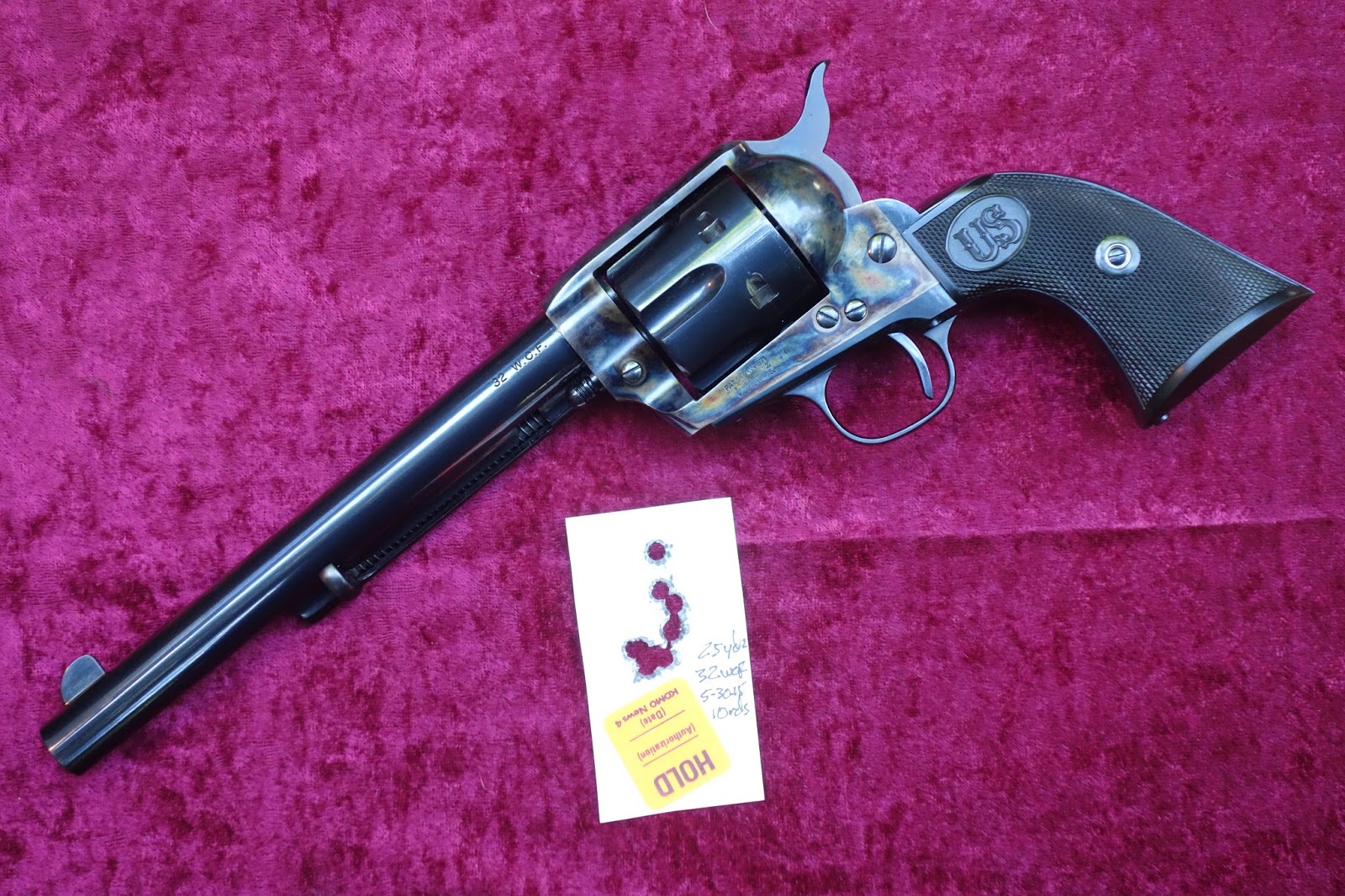 I originally though the SAA and Bisley were too barrel heavy. Had a few and got rid of them. Shot factory ammo through the early guns and was never impressed (115gr bullets @ 800fps?).

Then I found Snooky Williamson's Winchester book. What I'd consider the ultimate tome of so many books on shooting a Winchester of any vintage.

The first use of Snooky's loads were from a vintage Marlin '94 that looks a lot like this....

Hard cast lead and jacketed soft nose bullets were killers in that gun. Feral cats, ravens, magpies, skunks and porupines all fell to that gun. Along with a few of the coastal black tail I head shot. 32-20 killed them all easily. The most impressive performance I saw was a 115 lead bullet go through 6 feral cats (one bullet) I was trying to clean off the property. Not a pretty memory but the 32-20 did its deadly work with little e fanfare.

Of course none of Snooky's hot loads would run in a SAA. So the Marlin got traded off along with the 32-20 I got to go with it. Took me another decade of so to go back to the 32-20 with the Browning 53s. Again exceptionally accurate rifles with hot hand loads or factory lead. Took more deer with the light little Browning '92 clone. How do they shoot with that thin pencil barrel? One is even better than the '73 below. One not quite as good. Sure are fun to pack by hand in the field though with a button mag. Wood is hard to ignore

Still took me some time to buy another 32-20 SAA and then tone the loads down so they would run in a SAA without primer flow jamming the gun up. Once my reloads were down between 1000 and 1100fps with a 115 lead bullets from my short SAAs things got really good in the 32-20 rifles and handguns we own. My wife shoots a pair of 32-20s and a Browning 53 with a full mag tube in SASS. I have the same setup that I have wanted to shoot in Frontier cartridge, gunfighter.....one handed black powder. The ultimate SASS gamer's rig Just haven't done it yet as I hate cleaning my dbl barrel 12 of black. 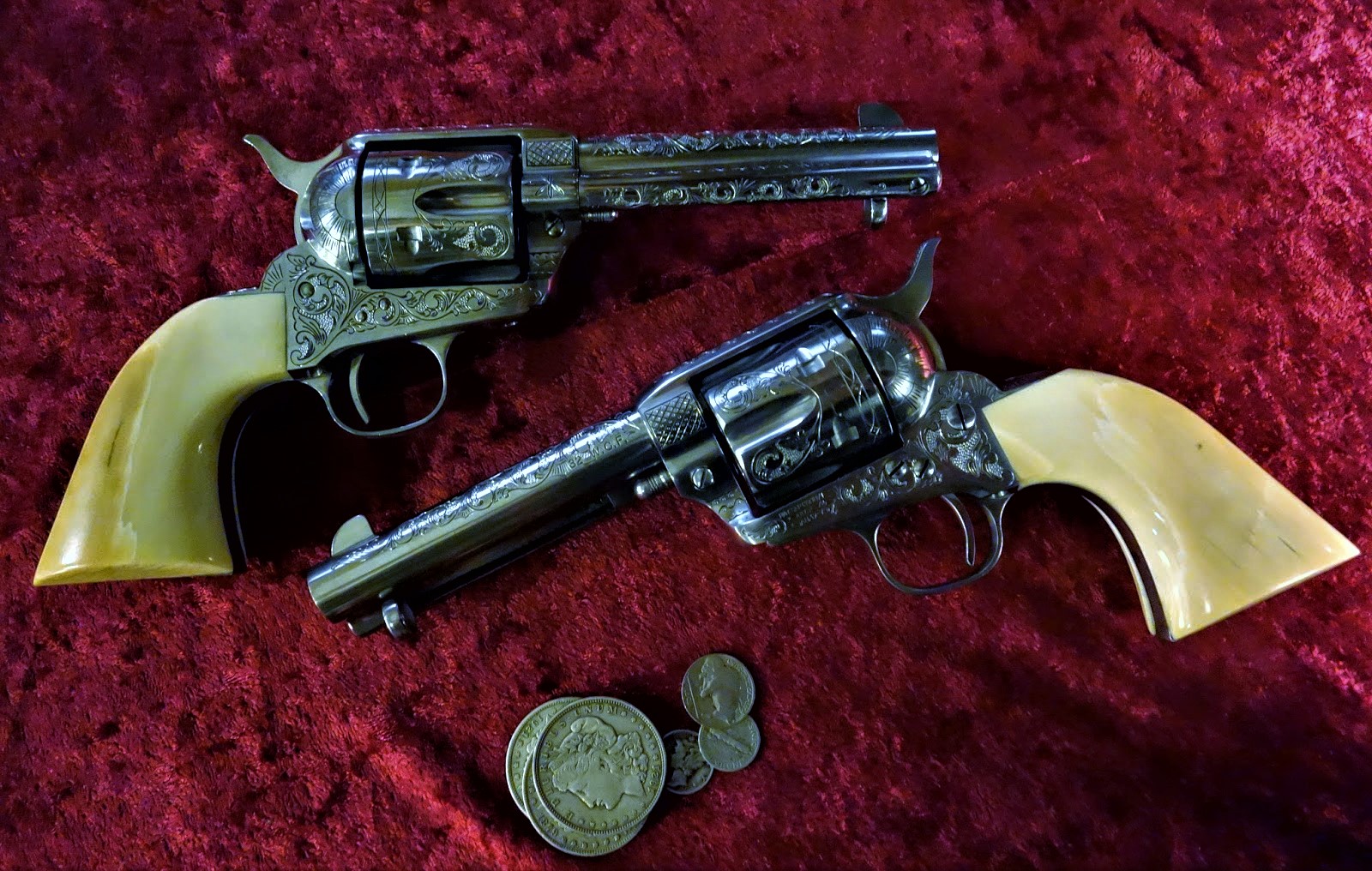 And what a pleasure the 32-20 is to shoot! Stunningly accurate in rifle and handgun. Little to no recoil in either weapon and still DEADLY accurate...and simply deadly. Really cheap and easy to reload once you get it up and running. 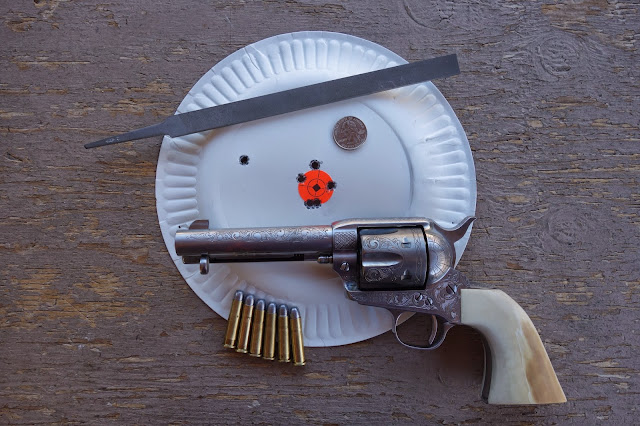 Elmer Keith called his SAA "old Pop" and used it on small game up to deer.

"My search for the .32-20 has not been so successful as my mentors.
Have you priced a .32-20 seven and one-half inch Colt Single Action lately? (which is why the USA guns are pictured, sorry) Although I've seen them priced in the trade papers, I've never seen one in more than thirty years of attending guns shows. Maybe I should re-phrase that. I've never seen one in shooting shape that I could afford even in my wildest dreams.

Just when all seemed the darkest as far as the .32-20 is concerned, along came Hunter Pistol/Field Pistol courses of fire under NRA and IHMSA and the deep need was for a light-recoiling, flat- shooting, pistol cartridge for use in short range silhouetting....."

As is Hamilton Bowen, ".32-20 Ruger Single-Six — Loaded in a modern revolver with high-performance ammunition, the lowly .32-20 may be best of all the small-bore revolver cartridges. It will shoot 110--115 gr. bullets at least as fast as a .357 Magnum and, since the .32 caliber bullets of this weight have a better sectional density, trajectory is flatter, velocities at longer ranges higher. Recoil is negligible even though muzzle blast can be annoying. It’s hard to imagine a nicer small-game and plinking round." Love to own that one!


My latest 32-20 purchases have been a pair of 4 3/4" SAAs and a '73. Have yet to shoot the unfired pair of SAAs. But sure like knowing they are sitting in the safe here waiting to be shot! The '73 on the other hand is a real paper cutter that sits beside the fireplace fully loaded ready for field varmints.

Below is my Cimarron 20" barrel Deluxe short rifle and some of the first targets I shot with it.

Weight empty 7# 13.5 oz.
25 yard targets with ten rounds of 115gr. lead bullets in each plate from a sand bag rest. If I could do my part this rifle would cut one hole 10 round groups at 25 yards. Most field pests are easy pickings out to 50 yards or more. 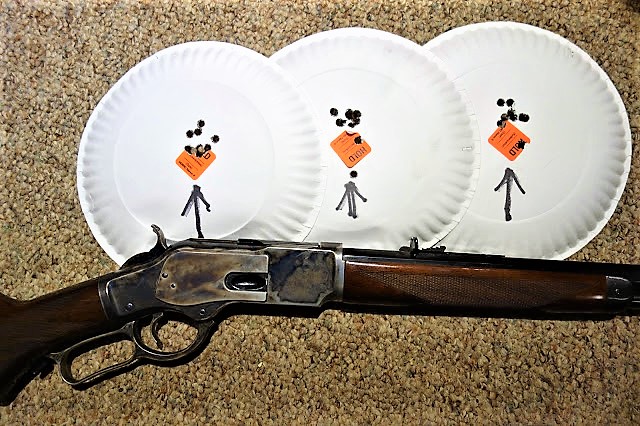 32-20 is a fine cartridge in a SAA. For plinking and small game one of the best IMO. Others better than me thought the same. HV rounds in a small frame lever gun are simply deadly on anything up to small deer.

But face it, I just like the SAA cuz it is purty But no doubt the old 32-20 Colts (and new ones as well) should be smoking! 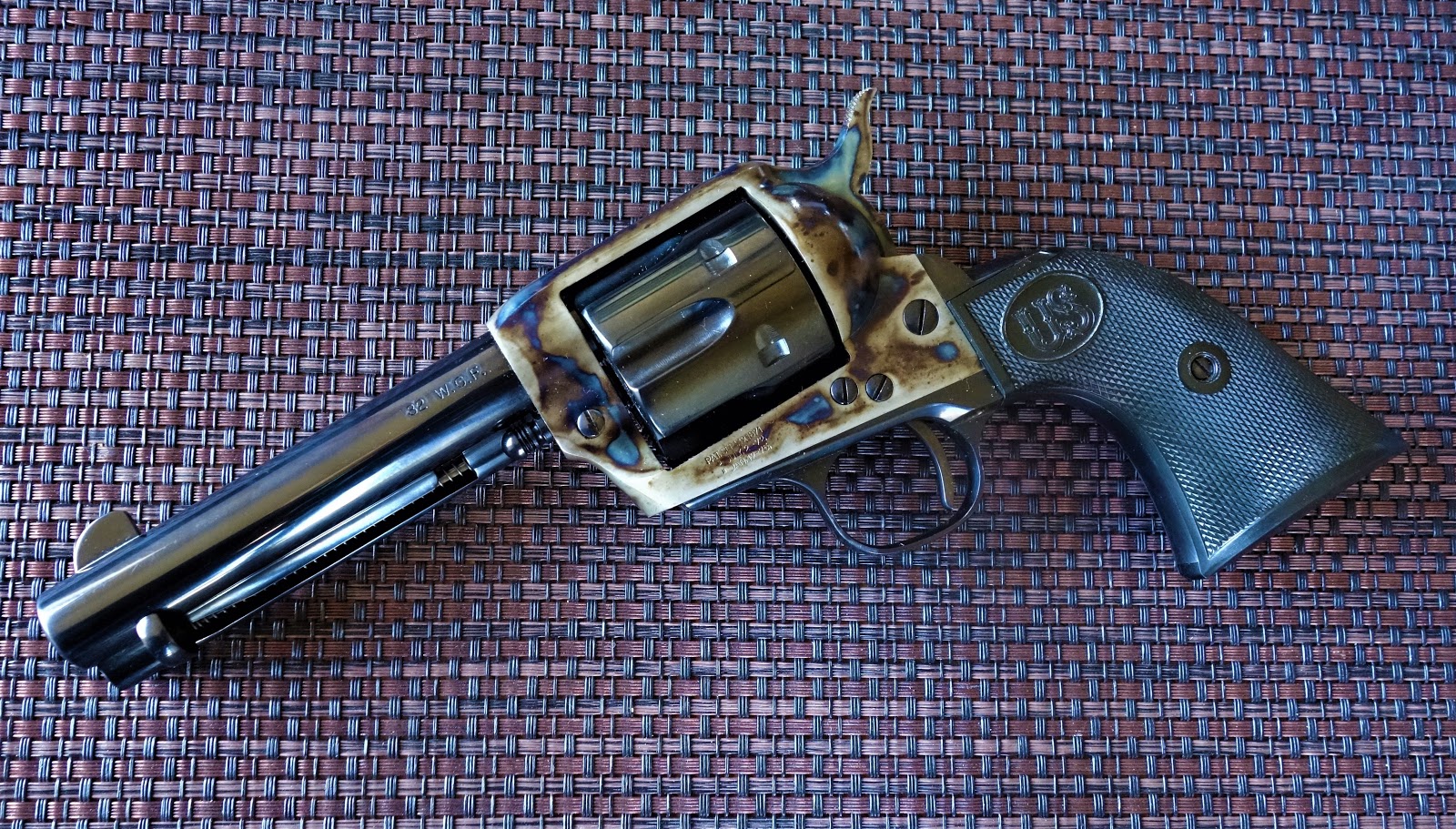 Need a challenge? Try putting all six from a 32-20 SAA in the same hole at 15 yards off hand It is a mighty small hole :bang_wall:

Joined Mar 18, 2010
·
2,454 Posts
Great article and pictures. Looks like you have run the gamut of arms in 32-20! At the present time, I have only one 32-20, an Army Special. This is a gun that I bought as a handyman special that someone had filed the front sight down to almost nothing. I made a new front sight to my liking and have enjoyed shooting it ever since!

Joined Sep 6, 2004
·
2,268 Posts
I once owned an SAA in .32-20 with a 4 3/4" barrel that shipped in 1900. The finish was gone and the bore was pitted. It felt about like shooting a Ruger Single Six with all that weight. The barrel leaded badly so I ended up trading it towards a Model 1905 Mannlicher Schoenauer 9x56 cal takedown rifle. I do have an S&W M&P Model with 5" barrel that shipped in 1923. It has a good sharp CRACK when fired with factory lead bullets. One day I will handload for it. It's a cool cartridge for sure.
M

Joined May 14, 2013
·
2,698 Posts
I have long advocated a Colt New Frontier or mid-frame Ruger Blackhawk, with 7 1/2" barrel in .32-20 would make a great varmint revolver. And mizzouhunter apparently stumbled upon one, or had one built.

Thanks for bringing this up 'hoody.
I have a question about bore size for those that shoot the 32WCF.
I noticed that factory loads from BH keyhole in my '73 and SAA. The box is marked ".311" I reload .314s and they perform great.
Has anybody slugged their SAA 32WCF? I wonder if 1st Gens are larger in bore diameter than later Gens.
B

i just ordered 500 rnds of ammo for my only 32-20...a model 1892 my father handed down to me when he could no longer shoot (or rather handle/fondle the old winchester). it's a first year rifle. he shot less than a box of ammo through the gun - i remember it as part of his collection since the mid1960's.
i actually finished up his box of 32-20 ammo this summer.
like just about all 1892s...it has an action like butter.
i am looking forward to many hours of shooting this 32-20.

when my 500 rounds are used, i'll begin reloading for the caliber. like a goober, i sold off 500 pieces of new brass a year ago!

fun is just a week away.

For lead I do as well.

Caveat for the guys new to reloading 32-20. Don't mix brands of brass. IMO I don't even want mixed bass in the room It is nightmare when you go to reload as everything has a different OAL. 32-20 needs a good roll crimp especially in the mag tubes of the lever guns. I've loaded Remington, Winchester and most recently Starline brass. I've since sold off everything but the Starline which is easy to come by.
B

Joined Aug 10, 2010
·
735 Posts
I am also a fan of the .32-20. The Remington Model 25 is really a pleasant rifle to shoot. As noted previously, a good crimp is needed in the tube magazine. Avoiding mixed brass and crimping in n additional step using the Lee factory crimp die have eliminated crushing cases.

LEO918 said:
Bought this one for condition and caliber. View attachment 424346
Click to expand...

That is a beautiful Colt SAA. What serial number range is it in?

Joined Jul 5, 2008
·
5,799 Posts
This is one of my coolest SAAs. It locks up like a bank vault. Any recommendations on factory ammo? I don't reload, unfortunately.