Joined Oct 18, 2015
·
583 Posts
Recently acquired US model 1841 "Mississippi" rifle with an 1848 lock date--still in shooting condition. First used in combat by the 1st regiment of Mississippi rifles--a volunteer unit led by Jefferson Davis in the Mexican-American war (1846-1848) They were instrumental in stopping the Mexican assault at the battle of Buena Vista and became heroes of the war. Shown with a reproduction white buff sling and rifleman's pouch/flask set up along with a wooden cask canteen in common use at the time. The Mississippi volunteers' uniforms consisted of bright red overshirts and wide brimmed straw hats. Since the rifles had no provision for a bayonet when originally issued, the boys from Mississippi were also equipped with large Bowie knives.

forward_observer said:
Recently acquired US model 1841 "Mississippi" rifle with an 1848 lock date--still in shooting condition. First used in combat by the 1st regiment of Mississippi rifles--a volunteer unit led by Jefferson Davis in the Mexican-American war (1846-1847) They were instrumental in stopping the Mexican assault at the battle of Buena Vista and became heroes of the war. Shown with a reproduction white buff sling and rifleman's pouch/flask set up along with a wooden cask canteen in common use at the time. The Mississippi volunteers' uniforms consisted of bright red overshirts and wide brimed straw hats. Since the rifles had no provision for a bayonet at the time, they were also equipped with large Bowie knives.

Not original but a magnificent specimen I special ordered years ago, .54. These are fantastic rifles!

forward_observer said:
Recently acquired US model 1841 "Mississippi" rifle with an 1848 lock date--still in shooting condition. First used in combat by the 1st regiment of Mississippi rifles--a volunteer unit led by Jefferson Davis in the Mexican-American war (1846-1847) They were instrumental in stopping the Mexican assault at the battle of Buena Vista and became heroes of the war. Shown with a reproduction white buff sling and rifleman's pouch/flask set up along with a wooden cask canteen in common use at the time. The Mississippi volunteers' uniforms consisted of bright red overshirts and wide brimed straw hats. Since the rifles had no provision for a bayonet at the time, they were also equipped with large Bowie knives.

Not original but a magnificent specimen I special ordered years ago, .54. These are fantastic rifles! 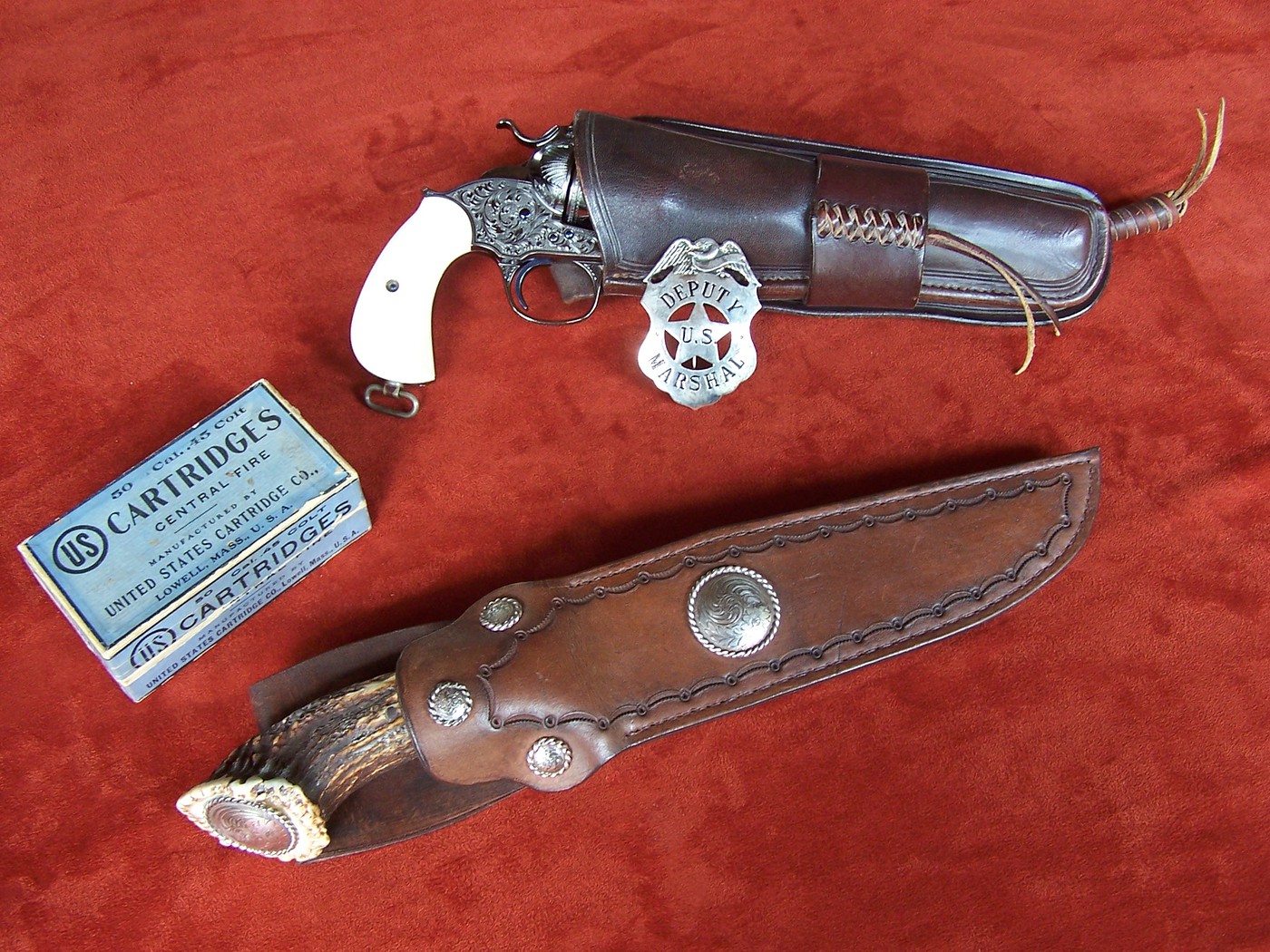 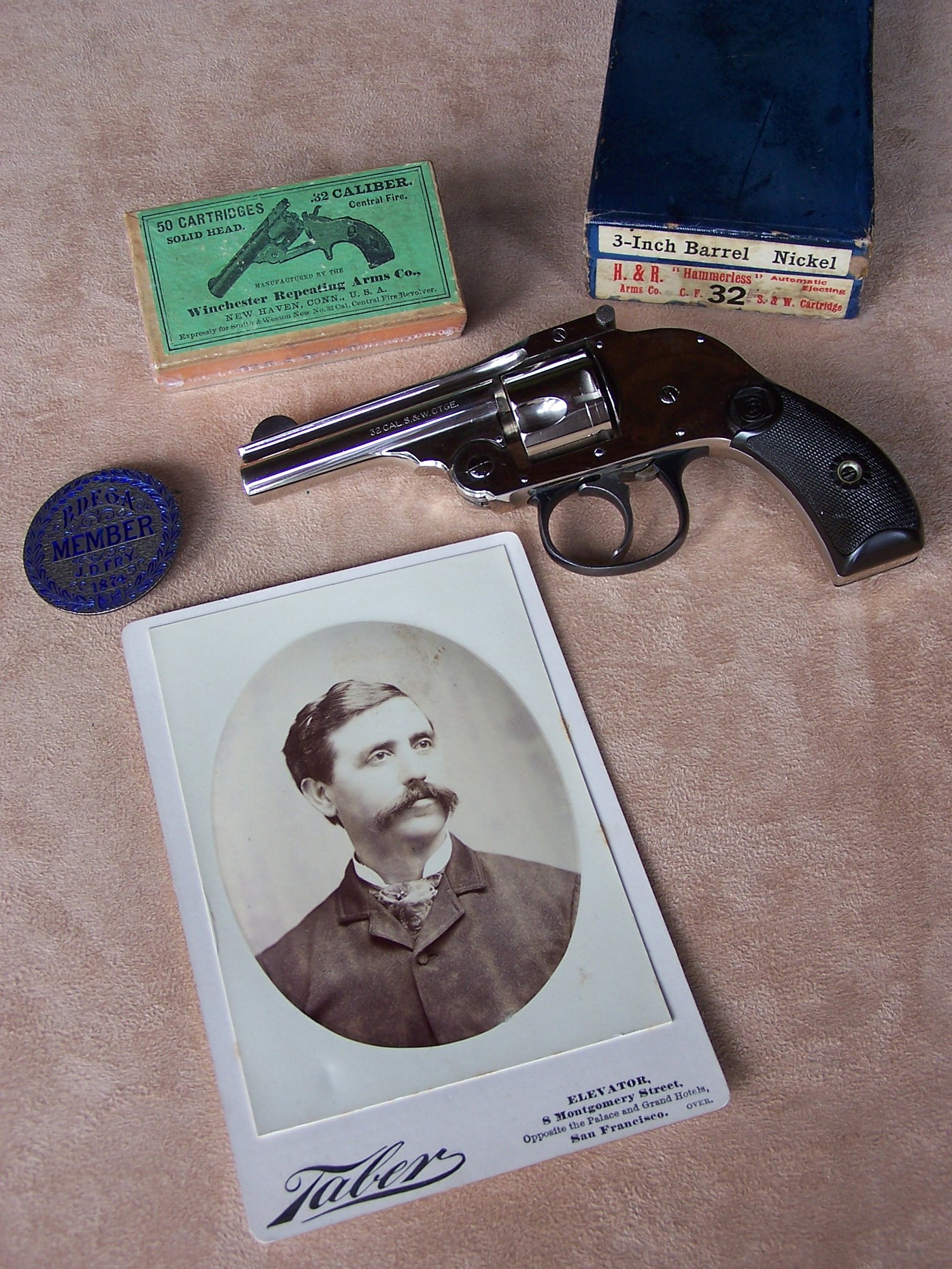 US Revolver Company used an all numeric serial number system until they reached 100,000 in 1916. In 1917 they added an alphabetic prefix and restarted the serial numbers at 00001.

The .32 S&W cartridge was introduced in 1878 for Smith & Wesson pocket revolvers. Originally designed by the Union Metallic Cartridge Co. (UMC) as a black powder cartridge using nine grains of black powder, the round has been loaded with smokeless powder exclusively since 1940. It is low-powered and perfect for use in small frame concealable revolvers and derringers. The round remained popular in the United States and Europe long after the firearms chambered for it were out of production.

Some companies manufactured arms under a variety of different names. Corporate names still familiar today saw their beginnings during this period, including Harrington & Richardson and Iver Johnson. Other companies, such as Forehand & Wadsworth, Hopkins and Allen, Merwin Hulbert & Co., prospered for a time before eventually closing, but most firms appeared on the scene for a brief period before vanishing into obscurity. Such names as "Bang-up," "Little Giant," "Swamp Angel," and "Tramp's Terror" were some of the many names under which these pistols were marketed by long-forgotten firms. In addition to American-produced examples, European arms also found a niche in the marketplace.

Characteristics of these pistols vary widely. Some were single-shot, while others possessed six- or seven-shot capacity, and at least one revolver utilized two cylinders which yielded a total of 14 shots. Most were small caliber single-action arms which utilized either .22 or .32 rimfire cartridges, although double-action revolvers chambered for .38 center fire ammunition were also produced. Derringers were typically available in .41 or .44 caliber. An assortment of features could be found, including brass- or steel-framed models; various butt profiles; round- or octagonal-barrels; fluted or smooth cylinders; bead, post, or half-disc front sights; top-strap or open-frame; removable side plates; pivoting top- or side-break mechanisms, some with automatic ejection systems, were available in this class of side arms.

Iver Johnson was a U.S. firearms, bicycle, and motorcycle manufacturer from 1871 to 1993. The company shared the same name as its founder, Norwegian-born Iver Johnson (1841–1895).

Iver Johnson immigrated to Worcester, Massachusetts from Norway in 1863 at the height of the American Civil War. Johnson was a gunsmith by trade at the time, but also worked as an inventor in his spare time, which would come in handy later on as he sought new and creative uses for his partially idle manufacturing equipment, a thought process which would eventually lead him and his heirs to diversify the corporation's businesses. His early work involved not only gun smithing locally in Worcester, MA, but it also included providing designs and work to other firearms companies, notably Allen & Wheelock for whom he made so-called "pepperbox" pistols.

Manufactured Firearms under the following names:

Joined Feb 4, 2010
·
9,857 Posts
The Assassination of the 25th President of the United States: William McKinley

William McKinley (January 29, 1843 – September 14, 1901) was the 25th President of the United States, serving from March 4, 1897 until his assassination in September 1901, six months into his second term. McKinley led the nation to victory in the Spanish–American War, raised protective tariffs to promote American industry, and maintained the nation on the gold standard in a rejection of free silver (effectively, expansionary monetary policy).

McKinley was the last president to have served in the American Civil War, and the only one to have started the war as an enlisted soldier, beginning as a private in the Union Army and ending as a brevet major. After the war, he settled in Canton, Ohio, where he practiced law and married Ida Saxton. In 1876, he was elected to Congress, where he became the Republican Party's expert on the protective tariff, which he promised would bring prosperity.

Although McKinley enjoyed meeting the public, everyone around him was concerned with his security due to recent assassinations by anarchists in Europe, such as the assassination of King Umberto I of Italy the previous year, and twice tried to remove a public reception from the President's rescheduled visit to the Exposition. McKinley refused, and arranged for additional security for the trip. On September 5th, the President delivered his address at the Pan-American fairgrounds in Buffalo, NY, before a crowd of some 50,000 people. In his final speech, McKinley urged reciprocity treaties with other nations to assure American manufacturers access to foreign markets. He intended the speech as a keynote to his plans for a second term.

One man in the crowd, Leon Czolgosz, hoped to assassinate McKinley. He had managed to get close to the presidential podium, but did not fire, uncertain of hitting his target. Czolgosz, since hearing a speech by anarchist Emma Goldman in Cleveland, had decided to do something he believed would advance the cause. After his failure to get close enough on the fifth, Czolgosz waited the next day at the Temple of Music on the Pan-American Exposition grounds, where the President was to meet the public.

He approached McKinley, who had been standing in a receiving line inside the Temple of Music, greeting the public for ten minutes. At 4:07 PM., Czolgosz reached the front of the line. McKinley extended his hand... but, Czolgosz slapped it aside and shot the President in the abdomen twice, at point-blank range; the first bullet ricocheted off a coat button and lodged in McKinley's jacket; the 2nd bullet seriously wounded him in his stomach.

McKinley urged his aides to break the news gently to his wife Ida, and to call off the mob that had set on Czolgosz—a request that may have saved his assassin's life. McKinley was taken to the Exposition aid station, where the doctor was unable to locate the second bullet. Although a primitive X-ray machine was being exhibited on the Exposition grounds, it was not used. McKinley was taken to the Milburn House.

In the days after the shooting McKinley appeared to improve. Doctors issued increasingly optimistic bulletins. Members of the Cabinet, who had rushed to Buffalo on hearing the news, dispersed; Vice President Theodore Roosevelt departed on a camping trip to the Adirondacks.

"It is difficult to interpret the optimism with which the President's physicians looked for his recovery. There was obviously the most serious danger that his wounds would become septic. In that case, he would almost certainly die, since drugs to control infection did not exist ... [Prominent New York City Physician] Dr. Mc Burney was by far the worst offender in showering sanguine assurances on the correspondents. As the only big-city surgeon on the case, he was eagerly questioned and quoted, and his rosy prognostications largely contributed to the delusion of the American public."

Unknown to the doctors, the gangrene that would kill him was growing on the walls of his stomach, slowly poisoning his blood. On the morning of September 13th, McKinley took a turn for the worse. Relatives and friends gathered around the death bed. At 2:15 AM on September 14th, President McKinley died. Theodore Roosevelt had rushed back and took the oath of office as president in Buffalo. Czolgosz, put on trial for murder nine days after McKinley's death, was found guilty, sentenced to death on September 26th, and executed by electric chair on October 29th, 1901.

The .32 Short was designed in 1860 by Smith & Wesson for their Model 2 revolver. During its lifetime, the .32 rimfire was loaded with black powder, followed by semi-smokeless and smokeless powder loadings. While it was popular as a very effective small game caliber, it was considered obsolete by the late 1930s, in part due to the introduction of high-velocity versions of the .22 long rifle using smokeless powder.

In Rockfall, Connecticut...after being empty for a few years, the old mill in town was torn down in 1845 and a new mill and dam was erected for manufacturing pistols. The principals in this factory were Henry and Nelson Aston, John North, Peter Ashton, and Sylvester Bailey, who secured contracts from the U. S. government for weapons.

The company, using the mill, is credited with being the first company to mass produce guns with interchangeable parts. From 1852 to 1879, Ira Johnson manufactured pistols here, until the factory burned to the ground on September 21, 1879.

Two years later, in 1881, Otis A. Smith built the 100 ft. long by 30 ft. wide portion of the current three-story brick building on the site.

Otis A. Smith was born in Massachusetts to a Scottish immigrant father in 1836. Prior to 1880, he worked with Ira Johnson making pistols.


After purchasing the mill, Smith patented his own designs for pistols and other hardware products. Otis Smith’s company, was referred to as the U.S. Revolver Company and The Otis A. Smith Manufacturing Company at different times during product.