Speaking Of Cowboy Hats In Westerns......

Joined Sep 6, 2004
·
2,315 Posts
I'm sure many of you are familiar with a series on Youtube entitled A Word On Westerns hosted by Rob Word. The latest episode is a good one, he interviews actor Mitchell Ryan about working on The High Chaparral TV series and working with Clint Eastwood on High Plains Drifter. Ryan was also in Monte Walsh with Lee Marvin and he talks about picking the right cowboy hat from the wardrobe department and of Marvin's choice of a distinctive hat. Make sure that you watch to the end, there is a great vintage publicity clip about Eastwood starting out as a director on High Plains Drifter and it predicts that he will have a long career as a star and director. They were certainly right.

Joined Feb 26, 2013
·
1,187 Posts
The cowboys on our ranch in started in 1894 in NM SE of Carlsbad had hats that looked more like sombreros, big full mustaches some with beards to protect against the sun and wind. And forget about the black hats lol in the sun when out there will occasionally hit 120. Will see if the picture box is still in the office or if is in the attic and post one.

Joined Jan 4, 2014
·
8,995 Posts
Fun stuff Walter. Thanks for posting it. Cowboy hat sizes, styles and colors have always been regional based a good bit on the weather conditions. A decent hat is just another tool.

One of the few things Lonesome Dove the movie really missed. More sombreros went to Montana than Texas will ever admit too

XIT Texan on the XIT in Montana around 1890. Gotta like those Californio snake spurs, saddle and his Mexican sombrero.

Joined Sep 20, 2012
·
9,854 Posts
The 'sombrero grande'' saw a helluva lot of the 'real' Old West (and afterwards, as well - they were lightweight and did a yeoman's job for shading the rider's face and neck) and they were well-favored in the Southwest, as well as 'down South'.

Joined Jul 30, 2018
·
1,194 Posts
An old friend of mine wore a straw cowboy hat in the summer and a felt cowboy hat in the winter. We always used to kid around that it didn't matter what the calendar said, it wasn't really spring or fall until he switched hats!
I would like to find a sombrero like those shown but all I can find are the cheap sequin models or the ultra-expensive show sombreros

Joined Jan 17, 2019
·
334 Posts
Haha, I'm a straw in the summer, felt in the winter hat kinda guy. Resistol is my go to hat company though a Stetson or an American Hat Co. will find its way into my rotation.

I've always appreciated a good sombrero but have never owned one myself. A 3" or 4" brim works just fine for me and doesn't grab the SW Oklahoma wind as badly as a wider brim will.

Joined Jan 4, 2014
·
8,995 Posts
Mr. Al,
RJ makes the real thing. $ 250+ to $300 delivered typically. Your grand kids will be wearing it if you ever decide it is no longer needed. They are that tough. Worth every penny of that when just a decent felt is double the buy in.
RJ Preston Sombreros | Facebook

Joined Dec 21, 2012
·
1,630 Posts
Work hat and dress hat. The silverbelly is on the hatrack at office till cooler weather arrives.


I always thought Lonesome dove did a fair job with the hats. Especially Call's.

Agreed, some great hats on Lonesome Dove and the other Larry McMurtry Series. Call's hats through I thought were really good. TLJ's hats are generally spot on for a period piece. Gus missed it by about 50 years in LD. I get the feeling RD just doesn't like some hats styles. Another one he missed by about 50 years in open range. Nothing wrong with either movie though. Wonderful actors.

At least R D had the rolls pointed in the right direction. The PBR folks run 'em backwards these days.

Joined Sep 6, 2004
·
2,315 Posts
This style made an impression in a couple of westerns. Caan took some ribbing from some local gunslingers in a saloon about his until he showed them that bringing a knife to a gunfight doesn't always mean that you will lose in El Dorado.

Joined Dec 24, 2019
·
921 Posts
I live in the west, and in my research I tend to find a lot of straw, sombrero's, and light color felts were worn more often than not in the West. Makes sense, it's hotter-n-hell in the desert. Light colors just make sense in the summer, and you can bet I'd be wearing something dark and thick in winter.
W

Agreed, some great hats on Lonesome Dove and the other Larry McMurtry Series. Call's hats through I thought were really good. TLJ's hats are generally spot on for a period piece. Gus missed it by about 50 years in LD. I get the feeling RD just doesn't like some hats styles. Another one he missed by about 50 years in open range. Nothing wrong with either movie though. Wonderful actors.

I was watching scenes from Lonesome Dove the other day and was thinking Gus’ hat looked too modern, but he could wear a beanie cap with propeller on top and LD would still be great. Sometime in the early 90s at Railroad Flats cowboy shoot I sold Wes Turner a drawing on leather of Wild Bill Hickok. I then used that $ to buy this hat a friend named Crazy Charlie had a guy in Reno make him.I thought it was similar to Woodrow Call's but with a smaller brim. All dusty in this picture. It could use shaping.

Joined Feb 21, 2006
·
6,412 Posts
In 30 years in Southern NM and AZ, I always wore straw or palm hats. Doesn't matter the season, it's too hot for felt. This one is palm leaf. It's crown isn't probably that traditional, but it's wide brim worked well for the sun. Colt in Heiser holster I usually carried. My mule Horace, named by someone else, because "he's not a horse".

Joined Jan 17, 2019
·
572 Posts
I have a palm lightweight Stetson hat for a few year's. I truly love the hat.
It's perfect if I have yardwork or I'm outdoors's on a summer day.
Not a lot of people use them here in Maine. But I don't care, I do!
I would like to find a grey wool hat for winter use.
I get a bit confused about the 2 or 3 dozen style's of western hat's.


Truth is the cowboy hat was actually invented by the Spanish. The Spanish horseman's Cordobes hat was brought to Mexico and then redefined again by the early Californio Missions.

The "cowboy" hat was around long before JB Stetson (1830-1906) showed up in Colorado around 1865. Much as we all like a good Stetson, J.B. missed inventing the cowboy hat by a full 100+ years. Felted hat production in Alta California was controlled early on by the Mission Priests. Straw hats were to common man's hat. Straw Sombreros and sewn felt or tapestry Sombreros came later from south of the border. Today Californio style horsemen often pay homage to traditional roots by wearing a hat similar to the early Mission style. The Alta Californio Mission era was 1769 until about 1833. A time of hide and tallow from millions of cattle. And the California Grizzly bear to eat the rotting carcasses . 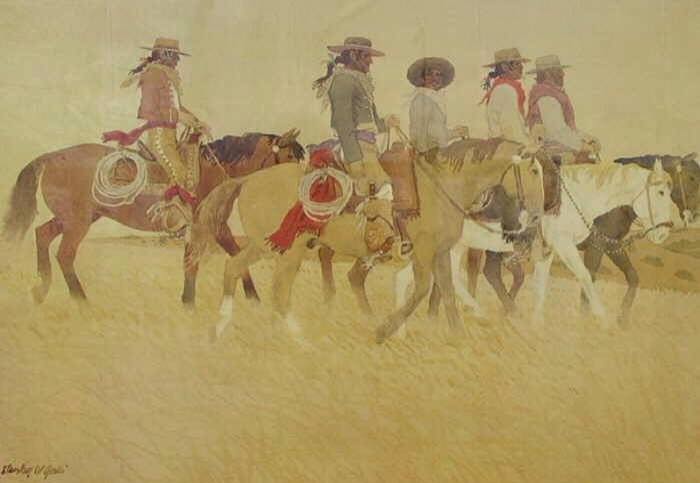 No one in the right mind rides ( or works!) in 100+ temps without a good straw. Better yet soaked in water as often as possible. Places you can't give a black felt away.