Joined Apr 29, 2009
·
601 Posts
HighFlyingCowgirl
Women & Guns Magazine
May-June 2001
By Susan Laws, Contributing Editor
Celebrated pilot Wally Funk continues to lead the way for women aviators
It may be curious to profile an aviator in a women's gun magazine, but I have read several essays of late professing to describe and categorize "female gun owners." That a dedicated female gunny can be both an Astronaut and a recreational Cowgirl Action Shooter should not be news. Incessant stereotyping commonly ignores the enormous range of personal accomplishments (beyond shooting) of women gun owners in this country.
In an effort to gain public acceptance for our subject, gun writers (like me) sometimes over-do the portrayal of the woman gun owner as a modern day June Cleaver. This is not to say that she can't be. The "average" female good citizen who understands her Second Amendment rights and responsibilities will always be our mainstay. But a female gun owner whose real-life story is of exceptional tenor makes the rest of us proud to 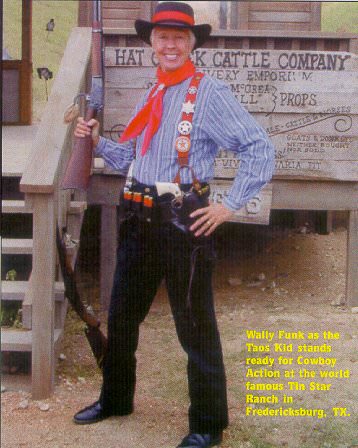 ​
have her among us.
Wally Funk is a women gun owner, a Cowboy Action Shooter (alias Taos Kid) and a renowned aviator who is as down-to-earth as they come. She is an enthusiastic member of the Single Action Shooting Society and the Comanche Valley Vigilantes cowboy club in Glen Rose, Texas. Playing "Cowboys & Indians" goes back to her roots in Taos, NM, where local Native Americans taught her to hunt and fish. For many women, the cowgirl is the symbol of the free spirit within us. Taos Kid takes that spirit and applies it to every aspect of her life, from shooting sports to a personal quest for ZERO-Gs.
As a young college girl, Funk found her future in an aviation class and eventually became a highly rated pilot at Oklahoma State University in Stillwater. After graduation, she was told by the airlines that she could not be hired as a commercial pilot because there were no ladies' bathrooms in the training facilities. (Not until 1973 was a woman hired as a commercial pilot.) Military jet training was also off limits but she was hired at Fort Sill, Oklahoma, as a flight instructor for propeller-driven aircraft at $4 an hour. Along with teaching, she continued more specialized aviation training and kept racking up flying hours.
In the early '60s, she was selected to be a member of Mercury 13, a testing program for potential female astronauts. Along with 25 other women, she took part in a series of tests to determined whether women could measure up to the same rigorous mental and physical tests that the famous corps of male astronauts had experienced. The women scored unexpectedly high (Funk scored higher on two of the tests than John Glenn), but NASA abruptly cancelled the program. The disappointed women were initially told that NASA had decided to follow a federal policy from 1959 stating that astronauts should come from the ranks of the military.
In fact, after Congressional hearings, it was determined that all future U.S. astronauts would be drawn from the ranks of military jet test pilots. Since all women were excluded from jet test pilot school, they were in effect excluded from becoming astronauts. It was a devastating blow to other members of the program who were livid and outspoken in sighting sexism as the reason behind the cancellation. Funk was disheartened but refused to be defeated. I "threw it a fish" she says, recalling an Indian phrase she learned in childhood. "It means to let it pass, keep moving forward and find another way."
While never seeking to defy the establishment, Funk looked for unofficial ways to continue testing, preparing herself for the remote possibility that NASA might reconsider. She found supporters at El Toro Marine Corps Base and became the first woman to undergo the high altitude chamber test and the Martin-Baker Seat Ejection test. She also underwent the centrifuge test to measure her ability to withstand increasing gravitational forces such as those encountered in space-flight liftoff and re-entry. Military personnel who took the centrifuge test were equipped with G-suits that helped tighten muscles to avoid blacking out. But as a civilian, she was not entitled to a suit.
"I asked my mother to give me her tightest merry widow (cowgirl corset). I called it the Wally G-suit! I wore it under my bulky flight gear and walked rather stiffly" says Funk. "No one noticed and when the Gs began to increase, I clenched up, tightening the corset, and got through the curtain of unconsciousness with no problem. Test administrators were amazed to see anyone withstand five Gs without a suit.
After the Mercury 13 experience, Funk went on to become an accomplished pilot and one of the first women investigators for the Federal Aviation Administration. These days, the energetic 64-year old takes pride in teaching young students to fly at Northwest Regional Airport near Fort Worth. After 44 years as a Chief Pilot and investigator, she prefers to spend time with youngsters who want to go on to the airlines or the military. This June she will have students graduating from both the Air Force Academy and the Naval Academy.
This pioneering woman thinks of gun ownership as natural and matter-of-fact. She grew up treating guns as practical tools and at age 14, earned the distinguished Riflemen's Award for expert marksmanship. "I consider firearms training for gun owners to be as critical as flight training for pilots," says Wally. In her "down time" the Taos Kid finds fun and fulfillment in the lively sport of Cowboy Action Shooting. She is at home with the classic vintage firearms and enjoys shooting in a competitive arena.
Though she has other interests, Wally has not given up on her dreams of space flight. Last year she took part in an intensive astronaut training program at the Yuri Gagarin Cosmonaut Center in Russia in preparation for becoming the first woman passenger on space station MIR. But once again, her hopes were dashed. It was recently announced that MIR had outlived its usefulness and was scheduled to come down.
Without missing a beat, Funk is moving on to the next step. Work on the ISS (International Space Station) continues to expand and Russia may be opening an avenue for civilian participation within the next two years. If that happens, the Taos Kid will be prepared. And preparation is, after all, the key to success for extraordinary aviators as well as for women gun owners in all walks of life.
1 - 1 of 1 Posts
Join the discussion
Continue with Facebook
Continue with Google
or sign up with email
About this Discussion
0 Replies
1 Participant
Last post:
Jersey Kid 1 d ago
Colt Forum
A forum community dedicated to Colt firearm owners and enthusiasts. Come join the discussion about performance, gunsmithing, troubleshooting, reviews, accessories, classifieds, and more!
Full Forum Listing
Explore Our Forums
Colt Revolvers The Lounge Colt Semiauto Pistols Single Action Army Python
Recommended Communities