Joined Jan 7, 2010
·
203 Posts
Recently I picked up a very rough 2nd issue, 1936 Police Positive Special with a 4in barrel. When I say rough, it's got rust starting on it. Plus certain parts the metal looks like might of met a wire brush in it's time. But mechanically it's all there. I just have to replace the cylinder latch pin and a couple springs and should be back in action. Since the original finish is obliterated, and is basically a parts gun at this point, I'm kind of wanting to turn it into a snubbie. I was going to just buy a 2in DS barrel and have a smith install it. But pricewise, most of those barrels cost just as much if not more than what I paid for the gun. Plus most the ones I've seen are ramped front sights and not the half-moon. So that now has me thinking cutting down the 4in to a 2in might be the better option.

On to my questions. Can the front moon sight be re-used? If I read correctly, that it is brazed and soldered into a grooved channel cut into the front of the barrel. Removing it sounds very achievable, but that reinstalling it is the trick. Something about the composition of the soldering used back then had a much higher melting point vs todays solders. For anyone that's done this, is there a practical approach how this gets done? Is welding an option? Or would that weeken the integrity of the barrel and possibly more? I know it'll never be the same value as a true DS. But that's never the point right? I just want a shooter I can play with at the range, and occasionally carry. Got this cheap enough for me to at least consider it.


Thoughts?
.
.
.
.
.
.
.
EDIT: 11/14 - Got the PPS fully functional today. Ejector is a little sticky but that can be smoothed out. As mentioned, not the prettiest thing out there. But it'll do. I do need to get some stocks on it, finished or not. Those later round butt grips were added as filler until something nicer comes along

Joined Jan 7, 2010
·
203 Posts
Forgot to add, I replaced the ejector rod today, but with the shorter length one used for the DS. So that's also provoking me to do a snubbie

Joined Feb 21, 2007
·
7,166 Posts
It has been done before and certainly can be done if one has the skills. The front sight would have to be removed and re-brazed into the new position. Here is what a real 2" PPS looks like if that may help: 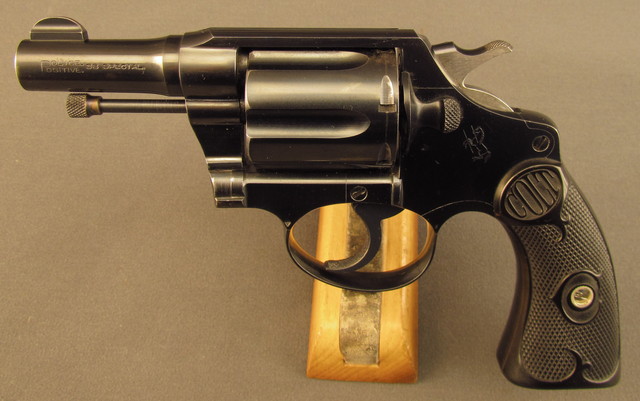 I'd select a real silver solder with a melt point above 1100 degrees, preferably a paste type silver braze.
This is easier to use since you can put the paste in the groove insert the sight and heat with a larger torch until it flows.
This will destroy any remaining finish but if you machine a groove in the barrel and get a good braze it's be as durable as factory.
Brownell's sell some paste type silver solders.

If you don't want that, just get some sheet silver solder and use snips to cut a small strip that will fit into the bottom of the slot on the barrel, then apply silver solder flux before inserting the sight.

You will likely need some sort of method of clamping the sight so that when the braze melts the clamp will have some spring pressure that will force the sight down into the slot.
You can do this by pressing down on the sight with a steel tool that won't draw the heat away.
The trick is to use a big enough torch, probably not a standard propane.
The faster you can heat the area the less the heat will spread to the frame.

Joined Apr 26, 2011
·
1,671 Posts
I have a PPS that was given to me many years ago by a partner of mine. The gun had a rough finish and a 3 inch bull barrel installed. I carried that gun for a while, and one day I dropped it and the front sight came off. Because the gun was in rough shape to begin with, I found a decent smith and had the sight re-installed , the barrel crowned and the entire gun refinished. The gun always had a great action, and when it came back from the smith it looked beautiful. That was some years ago, and that gun gets shot a lot, and the front half moon is still there. So, long answer but yes it can be done. Peace.

saintclair said:
Who really needs a from sight on a belly gun? I like Cam's 1-5/8' version. It is a copy of the one that Colt made as a prototype.
Click to expand...

Joined Oct 6, 2006
·
6,103 Posts
If your OK accepting that the lettering on both the top and side of the barrel will be incomplete and don't mind looking at that, then that hurdle is crossed. If it were myself, I would want the barrel to say "Colt" and not "olt".

if it were myself, I would look for a post war DS barrel, as when it's done it would look better to others you may show it to. Let me look downstairs and see what I have. OK, I have a post-war detective special barrel that the front sight is missing. Contact me if interested.

Joined Dec 8, 2009
·
588 Posts
I don’t know if the lettering would be centered, but I’ve always thought the 3” barrel looked the most balanced. Also the short barrel might have a bit more meat for cutting a sight slot.

Joined Jun 1, 2009
·
10,533 Posts
Cam beat me to it... I was going to suggest making a copy of Cam's friend's factory 1 1/4" PPS. Definitely the easiest way to go.
I have cut down lots of top breaks and mounted the sight blade in a new slot in the rib using just hardware store silver solder. But those little guns in .38 and .32 S&W don't kick very hard and the blades are super thin and small so this method seems to work okay on top breaks. But with bigger revolvers like this and with that style of front sight I'm sure real high temperature silver solder is the only way to do it properly. I've never tried it as I don't have the proper equipment to do it right.

Anyway here's some pics of some 1 1/4" PPS revolvers. The first one is Cam's friends original (and extremely valuable) factory made gun. I don't know if any others are even known to exist. The second is of the first one I made (with the pearl grips) and the one I made for Cam. The third is to show that you can actually hip shoot these instinctively and hit your target with a little practice. That was only about 7 yards but that's your typical gunfight distance. You can definitely ruin someone's day if it is ever necessary.