For personal extended carry at various times I usually carried a Colt Combat Commander, Officer's ACP, Colt Detective Special, Walther PPK/s, and S&W Model 66's with a 2 1/2 inch or 3 inch barrel.
I always bought the very best quality pistols I could afford for personal defense, figuring that the better the quality, the less chance of a failure.

I always followed John Bianchi's Rule..... One gun, one holster, one carry method.
This prevents "forgetting" what gun you're carrying today, how it's readied, and where it is in a stress condition.
Top athletes practice a move thousands of times to commit it to muscle memory so it becomes an ingrained movement.
If your'e using the same gun and carry, and practice with it enough, under stress you don't fumble it.

Over 20 years ago I finally settled on the Kahr Arms K9 in stainless steel.
It was the first mini-9mm pistol and is still the Cadillac of the type.
The Kahr was as small as the typical .380 autos of the day, but offered 8 rounds of 9mm, including +P ammo if desired.
The Kahr is so reliable it's never had any type of failure, even if I attempt to induce a stoppage by limp wristing.
While it's larger then the Kahr micro models and heavier then the polymer models, it carries very well.

I carry it in a Blackhawk Urban Carry fanny pack, often called a "5-5-10" due to the ability to draw the gun and fire 5 shots in 5 seconds, at 10 yards.
This gun and carry work for me, and where I live a fanny pack is totally common on the street, so it doesn't scream "GUN".
Years ago I did extensive experimentation with fanny packs, and finally settled on the Blackhawk for the top quality, very fast speed of draw. security of retention, and low profile size.

NickT said:
I love seeing all of the different choices everyone has made. It just goes to show you that there isn't just one gun that is right for everyone. I tell my students that all the time. Don't buy something because someone else told you to. Buy what is right and works best for you. A gun is a very personal thing and we all have different size hands.

I will also put in my 2 cents on having a "rotation" for carry. I always tell my students to be careful about this. If, God forbid, you ever find yourself in a self-defence situation, you are absolutely not going to be as calm and collected as you think you are going to be. You will be under a lot of stress. I don't care how much training you have had. I promise you you won't. You don't want to get confused about what gun from the rotation you grabbed or which holster location you decided to go with this morning. I always advise students to pick one gun and one carry location. It will save you precious seconds when you need them most. Again, just my 2 cents as an instructor.

For me, when I carry concealed, I carry a HK P30SK. I love the ergonomics of it. It just feels so good in my hand. Not too big but not too small either.
Click to expand...

I agree. When we get to the backup/off duty gun conversation when I'm teaching recruits, I advise them to at least pick a gun that is as simple or less than their duty gun. If you carry a Glock on duty, your off duty gun shouldn't have extra safeties or levers. It should be "point and click" just like the duty gun. I carry a S&W M&P as my duty gun and my 442 as backup/off duty. Both have the same firing process: aim and pull trigger.

Joined Jan 17, 2019
·
552 Posts
No such thing as an EDC here. In the warm months I carry either my New Agent or my Detective Special as both conceal easily under a large shirt. In the winter I'll carry my Delta Elite, my old Government Model, or my 4" Python. When I'm out in the sticks I'll often carry my old New Service.
D

Joined May 24, 2017
·
9 Posts
This probably won't help you much but I've been carrying a Remington model 51 for three or four decades. I carry it in an Uncle Mikes pancake holster in the small of my back on my pants belt. I barely know it's there. The 51 is super thin and points better than any handgun I have ever held. There is no better point and shoot pistol period. The sights leave a lot to be desired but I always figured sights are next to useless in a stressful situation anyway. That's why I carry it. The ergonomics of the 51 can't be beat.

Joined Dec 24, 2019
·
1,455 Posts
I live in pretty rural settings where there's just not much crime at all. More often than not, its just a Ruger LCP in the front pocket. If I feel I need a little more comfort, I'll slip a LW Commander into an IWB. Yeah the Commander is a bit dated, but I just don't feel a need to carry a hi-cap Tupperware super-pistol...and I just like the LW Commander.
J

Joined Mar 11, 2015
·
479 Posts
mine was a rock island compact 1911 but threw that in a deal for a honda 350x three wheeler, then traded a different honda 3 wheeler for a sw model 37 3 inch barrel. that thing is so light compared to the compact .45 I made it my everyday carry piece. jim


Lately the Beretta Nano with an IWB Theis or Ritchie CQ-QR OWB rig have been seeing a lot work.

As I grow older I can afford a little more and I would love to get an opinion on Best Colt 1911 for Carry most anytime.
Click to expand...

I noted a few great comments and suggestions. Lots of good choices these days.

Best 1911 for carry. There is a rabbit hole for sure Sadly much as I like and shoot Colt 1911s, nothing they make currently is even in the ballpark as a "good" let alone "best" 1911" IMO.

A good many of the best Commander size guns these days are built with either a titanium insert in the frame (Ruger) to eliminate the aluminum ramp of a 1911 getting dinged up, or better yet a ramped barrel which also totally eliminated the problem of an aluminum frame and reliability issues. Dan Wesson, Kimber and Ruger all offer ramped barrels in aluminum framed 1911s of various sizes.

Dan Wesson the most expensive and arguably the "best" of those I have listed. They are also exceptional values for the $ involved. As are Kimber and Ruger at their own price points.

Pretty much any 1911 under a 4" barrel will be finicky. If you stay at 4" or above reliability isn't an issue on a quality 1911. You can pretty much find a price point you are comfortable with and start shooting.

Couple of my favorites, all with aluminum frames and ramped barrels or a Ti insert in the frame ramp. 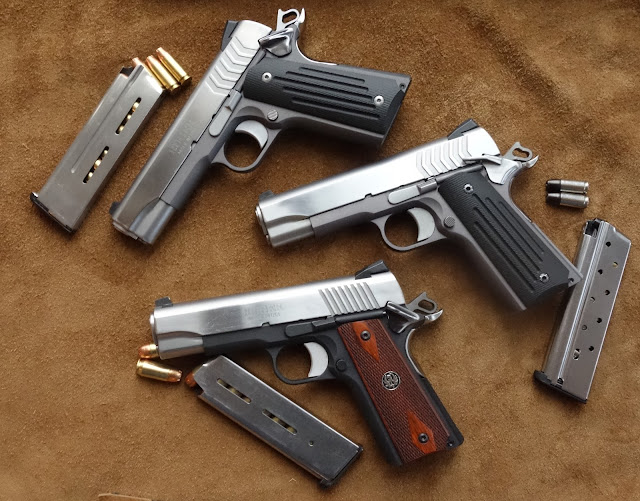 Kimber LWT 5" 1911, available in 45, 38 Super and 9mm. Outstanding guns for the money IMO. And sometimes easier/more comfortable to carry than a smaller 1911 if you use an IWB. The 45 version does not have a ramped barrel or an insert however.


Top to bottom. Top gun is a custom steel frame 1911. Middle gun is a Ruger LWT Commander size gun. The bottom gun is a Kimber LWT.