What would Mikey do, if Mikey was a knowledgeable Colt guy....

Joined Jan 4, 2014
·
6,605 Posts
I have this 1900 SAA that came to me as a total mess. It was over polished, nickeled, all Uberti internals, a cylinder that was cut too short up front and needing replacing, the original hammer needed to be totally rebuilt but at least it was the original hammer! Barrel, frame and front sight were original and in good shape.

At this point the hammer has been rebuilt, timing is perfect, but trigger sets a tiny bit forward at rest. I took a 2nd Gen 38 Special donor cylinder and had it recut to the 1900 contour and rechambered correctly to .45 Colt specs.

Next I fit a nice pair of Dennis Holland carved ivory to the gun. Mistake there.

After stripping the nasty nickel job I reblued the gun and then took most of the blue off the frame. Polished were the blue would typically show use.

The rounded edges and mated seams on all the parts and roll marks almost gone are now bugging me. But I have a hard time wanting a "new" 1900 Colt.

Some may disagree, but likely the Colt is never going to be worth more than it is right now. If you do disagree, please take the time and let me know why. A couple $K will make it new again. What would Mikey do and why?

Best as I can show it, as it sets now. DBL click the photos for a bigger image. She's a nice 10 footer right now 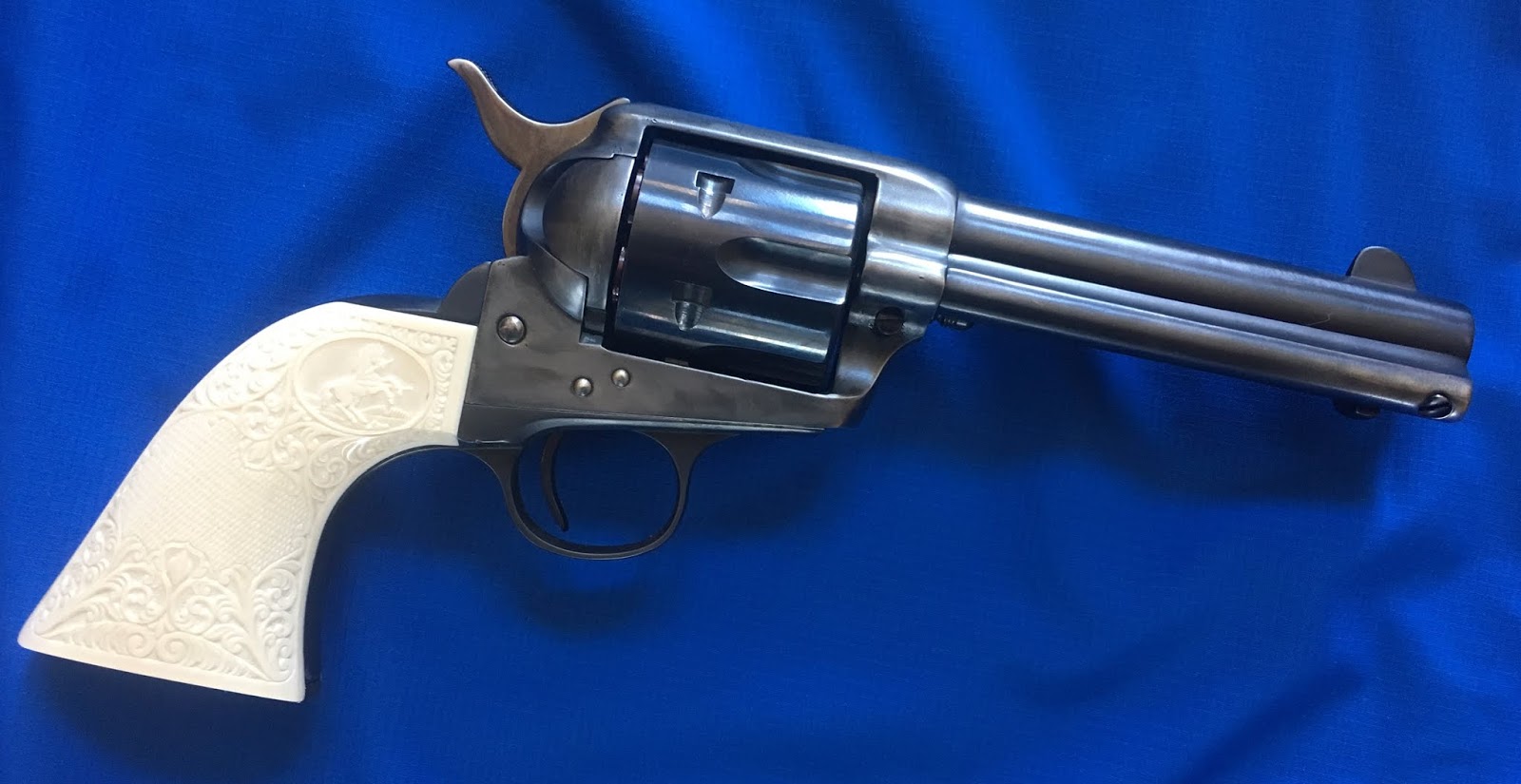 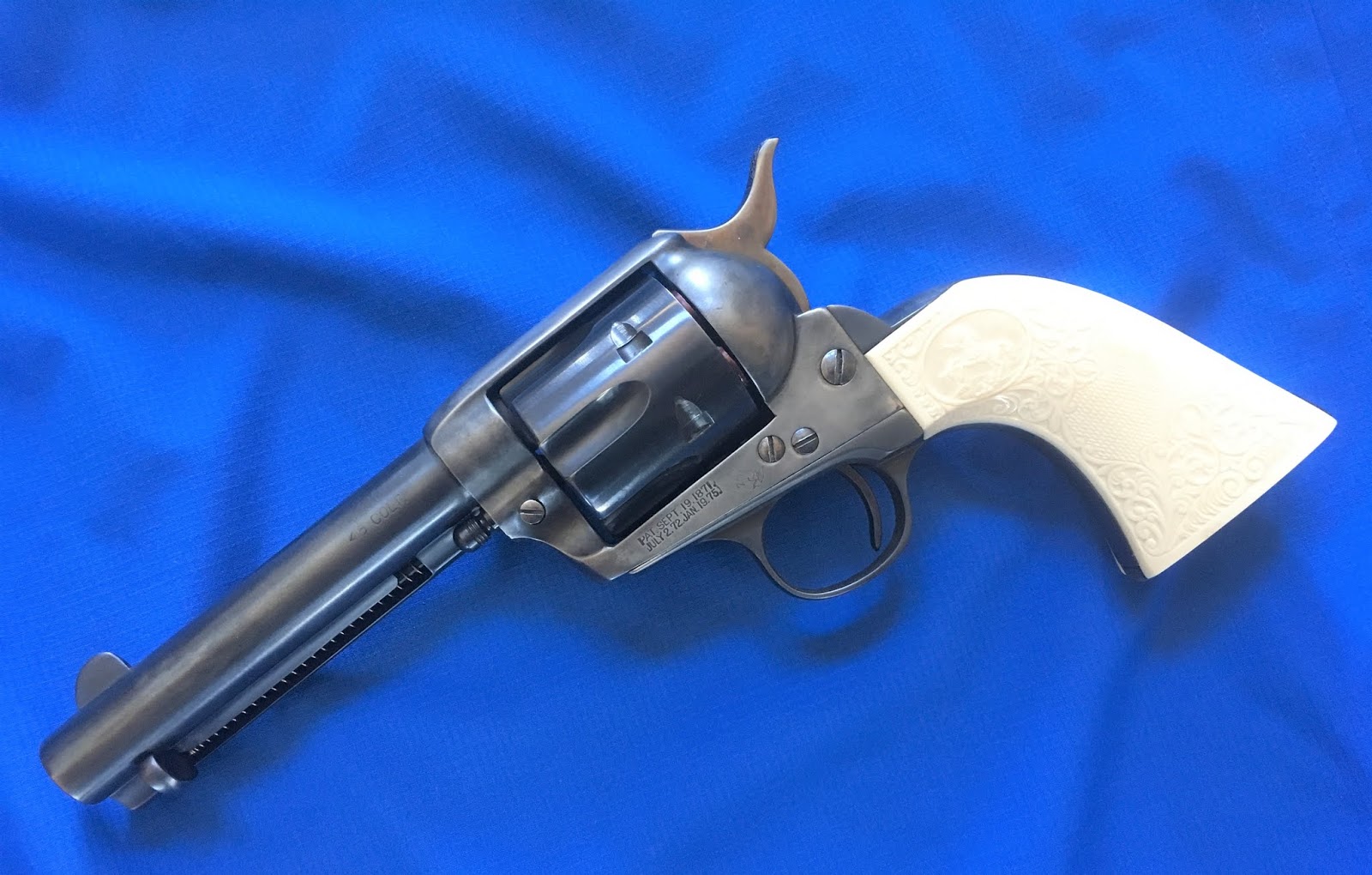 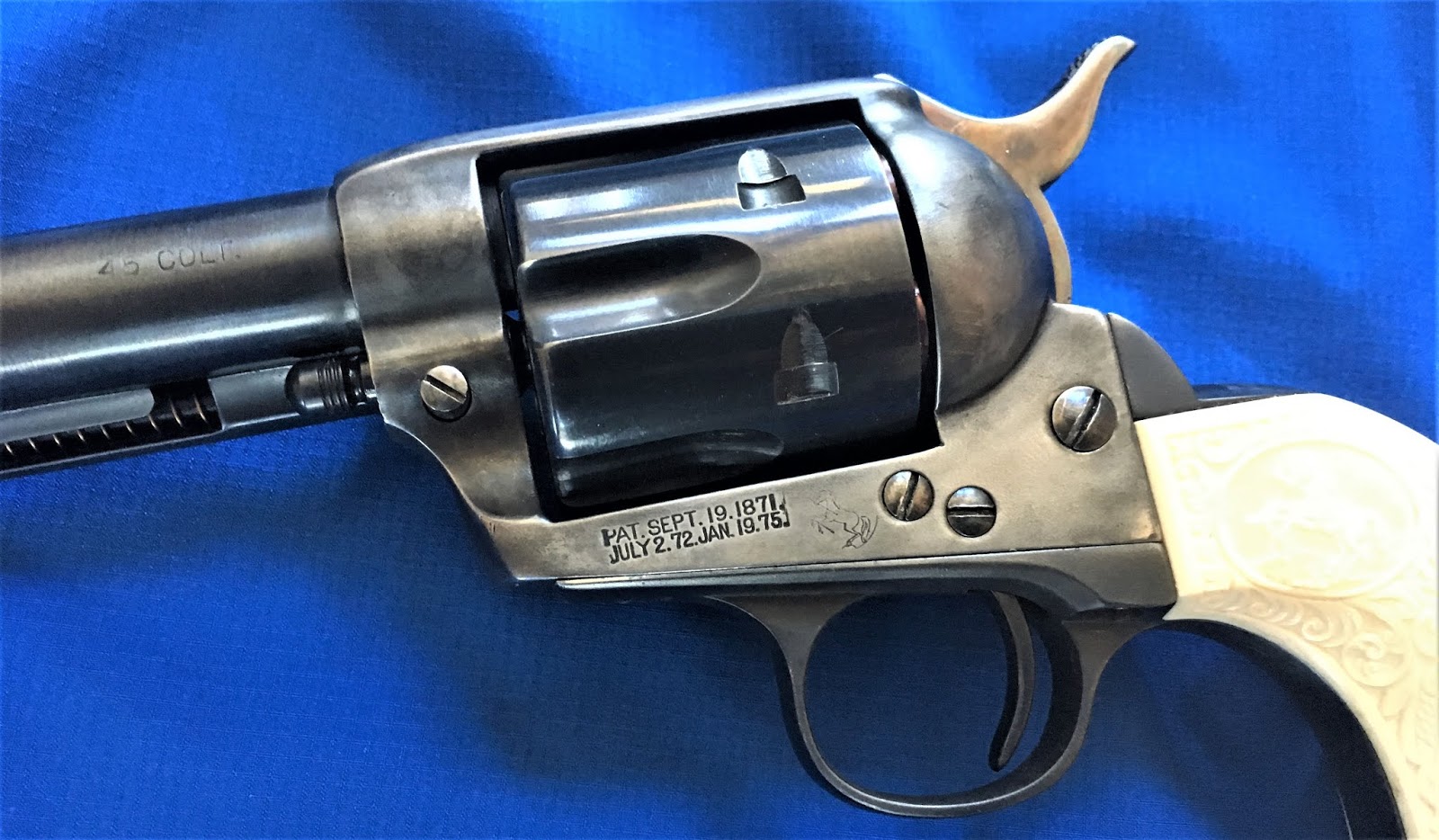 And the detailing on the grips..one reason I really like the gun. 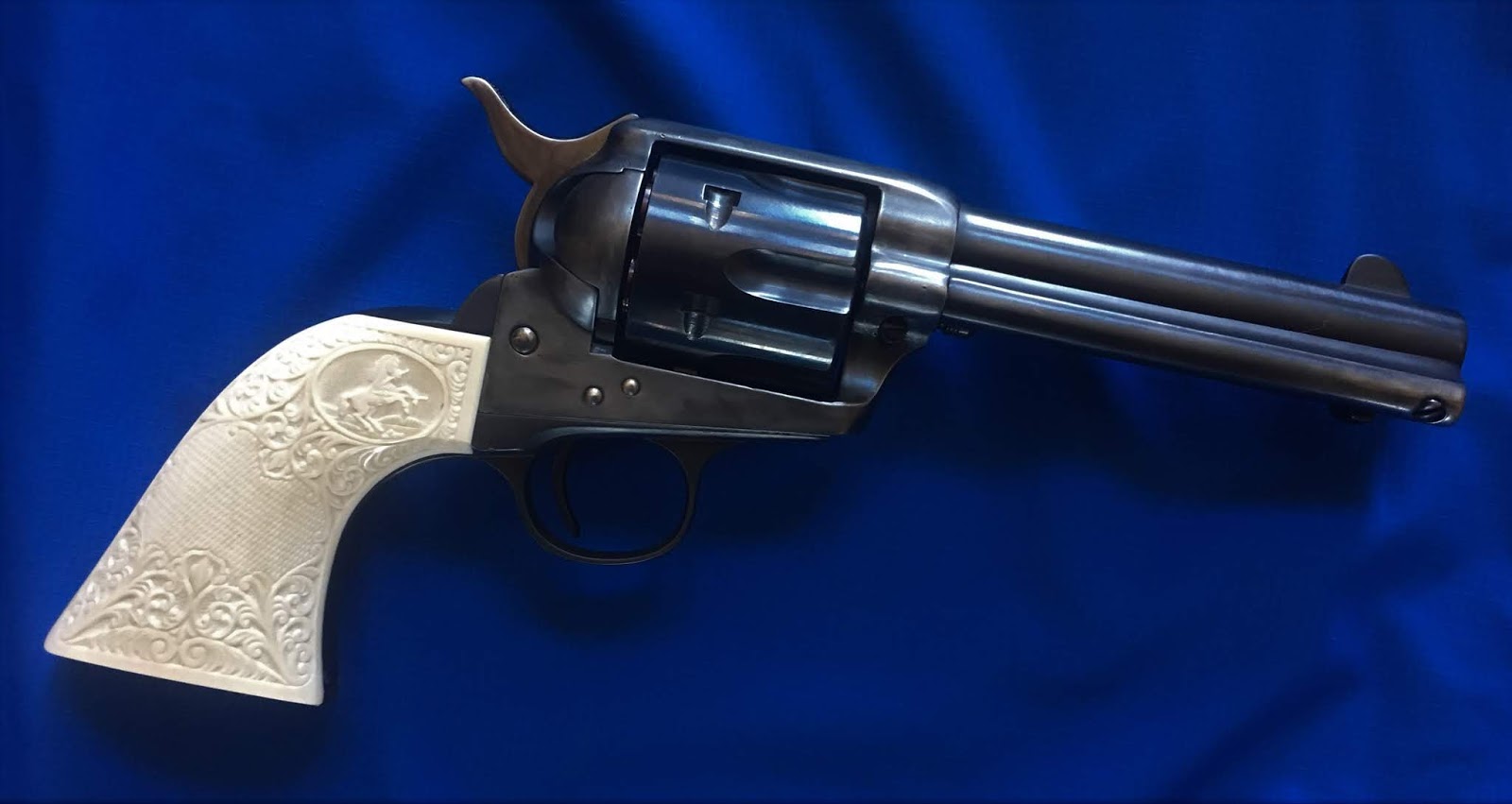 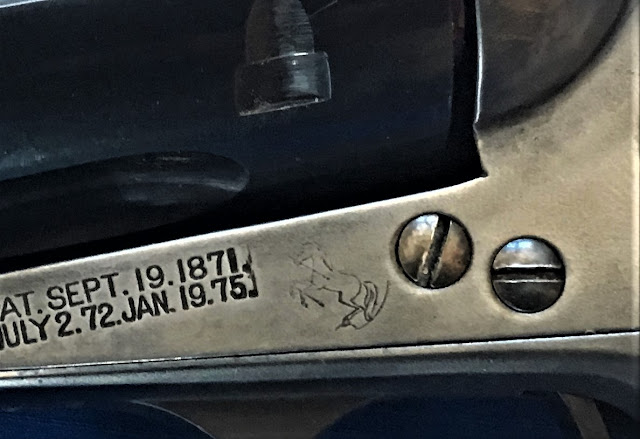 The frame would be resurfaced as well as possible and given a Turnbull color case hardened finish. The rest hand polished and blued with as close to a period blue as Turnbull could do.

Joined Feb 5, 2012
·
1,075 Posts
If it was your only Colt SAA....I would say send to Turnbull...and have a special ONE.....but we know you have many Colt and USFA pretty children...so unless you are just itching for a project...leave as is and enjoy the good work you have done....tony

saintclair said:
Let Lanara make it look new again. Those grips look like they are worth more than the rest of the gun. Re-do it for the sake of the grips!!
Click to expand...

Spot on there Terry. Terrible fortune that these grips fit perfectly on this gun :bang_wall:

Bright side it is 100% function wise and shoots really well. It is a gun hard not to like. Projects!? Always another project!

Joined Jul 22, 2010
·
2,768 Posts
No wrong choice either way. To me it would come down to available discretionary funds. If the funds are not an issue, I think this one is an excellent candidate for restoration, and Mr, Lanara would be my choice. IMO, while Turnbull's case colours are vibrant and many like the look, to me they don't look very much like 1st gen Colt.

Best regards,
► Show Full Signature
My opinion is free, and worth every penny of it.

No one has clicked on the restore and antique finish, which is where I was headed today. I like the look of a worn Colt. Just don't like a poorly finished and over buffed or "well worn" Colt.

Most of the money required will be remarking and welding up and recutting the edges on this one. At that point blue and color case aren't far off. I just don't envision a "new" gun here.

Joined Apr 18, 2016
·
580 Posts
I voted for "leave it alone" but then I'm the guy who likes USFA's Gunslinger models (did I mention I hate that name). The one thing I would do is save those fancy stocks for something else and put on some stocks that fit the rest of the gun. A 1900 shooter would never be a bad thing in my safe.

Yahoody said:
I agree on Lanara's colors. Harton's as well if he doesn't use Turnbull.

No one has clicked on the restore and antique finish, which is where I was headed today. I like the look of a worn Colt. Just don't like a poorly finished and over buffed or "well worn" Colt.

Most of the money required will be remarking and welding up and recutting the edges on this one. At that point blue and color case aren't far off. I just don't envision a "new" gun here.
Click to expand...

I haven't heard of anyone doing an antique finished restoration. It would be an interesting option, and I'd be interested to hear if someone is doing it.

Best regards,
► Show Full Signature
My opinion is free, and worth every penny of it.
V

Joined May 25, 2014
·
631 Posts
I’ve got some pretty guns tucked away...if I started selling tomorrow they would probably go first. It’s the “projects” that have a special place in my heart. The guns I’ve tinkered with, rebuilt, refinished, built stocks for, built holsters for, and carried for countless miles. These are the ones I’d have trouble parting with and the ones that the market wouldn’t be much interested in anyway. So my votes for the “project”. Make it your own and then use the hell out of it...everyone else’s tastes be damned.
C

chawk said:
Alan Harton has a gun of mine and is doing some sort of "antique" finish. I have no idea what it will look like when it is done.
Click to expand...

I picked up my, "Old Henry Nettleton" that we talked about through many pages around here back in Dec., and Jan., from Alan Harton today. It is now in perfect working order. I wanted the looks to stay the same because it is a old family heirloom. Not only is he one of the very best 45 SAA restorer's / smith's, he is also one heck of a good person.

MarkInTx said:
I would put the grips on something else deserving and leave the rest alone...then shoot the heck out of it.
Click to expand...

joehaber said:
you sure have done a nice job so for, with or without the grips. Will that be a BP gun?
Click to expand...

Thanks Joe. I appreciate the compliment. Projects are always a world of their own. No...not a holy black guy. As I hate cleaning guns. With a new modern steel cylinder this one is good to go for moderate smokeless loads. I don't shoot it a lot but I like knowing I could or the fella who gets it next can.

I admit to being swayed by the positive comments about Alan.

Grips? IMO Denis Holland's intricately carved ivory fits any condition SAA guys They actually look better on the gun than I can show in a photo. I think that level of carving belongs on a D+ engraved gun or on a plain old shooter. Won't own a D engraved gun...too busy for me. These grips are in that arena...pretty busy. The old war horse just show cases them. Any thing else on the gun and its just be a 1st gen shooter grade Colt. Although a pair of aged, smooth, 2 piece ivory might work better with the old pewter medallion inserts. Or aged one piece...